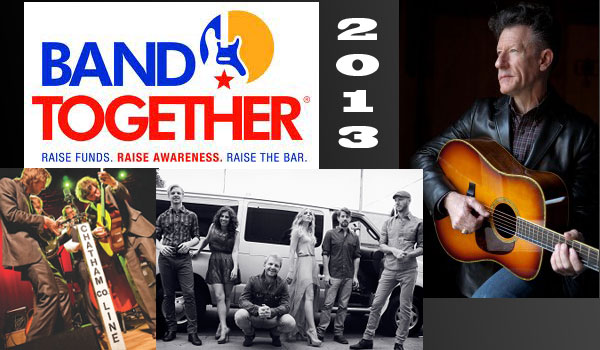 Cary, NC – As the sun set over Koka Booth Amphitheatre, Delta Rae finished up their set and the crowd in Cary waited patiently for the main event. Finally, the acoustic band took the stage, but where was their front man? After a charming instrumental intro, Lyle Lovett entered from stage right and joined in for a catchy tune called “Choke My Chicken.” The evening was off to a great start.

A breeze picked up as the band played on. Several volunteers with donation signs for Band Together milled about throughout the crowd, hoping to reach their donation goal.

About halfway through the set, Luke Bulla, fiddle, stepped up to the microphone to sing a few of his own songs, including a previously unreleased, Southern hymn-inspired piece. Lovett offered nothing but praise.

Despite the weather, which was unfortunately cool for early May, the overall turnout was great and everyone seemed to be enjoying themselves. Sitting outside listening as the breeze carried Lovett’s smooth melodies served as a great break from studying for finals. Koka Booth amphitheater truly is a great venue. Hopefully, I’ll be covering more events there soon.

Cary’s Summit on the Future
Scroll to top