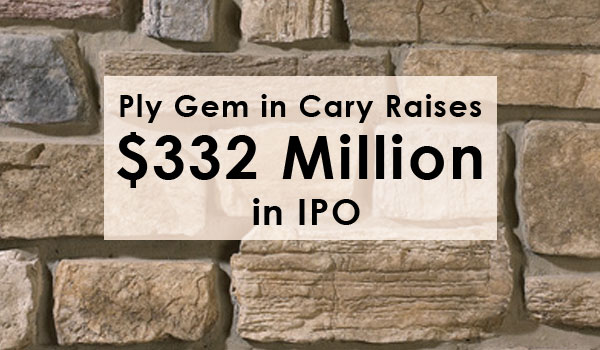 Cary, NC – The IPO market is back in vogue on Wall Street, at least for Triangle companies. Last week, Cary-based Ply Gem raised $332 million in an IPO on May 23, 2013.

Ply Gem is a leading maker of siding, stone, windows, trim, gutters and accessories. It is riding the recovery in the housing market. According to SeekingAlpha, the company sold 15.8 million shares, or about 22% of the  outstanding stock, for a total of $332 million.

The company, founded in 1943, has 5,000 employees. Ply Gem’s corporate headquarters are on Weston Parkway in Cary.

ChannelAdvisor, founded in 2001, sells software-as-a-service (SaaS) that enables retailers and manufacturers to integrate, manage and optimize their merchandise sales across hundreds of online channels including Amazon, Google, Facebook and Bing. The company has about 400 employees worldwide.

Earlier in May, Quintiles raised nearly $1 billion in an IPO ($947.4 million, according to Bloomberg). Quintiles is the world’s largest provider of biopharmaceutical development and commercial outsourcing services with a network of more than 27,000 employees conducting business in approximately 100 countries. The company was founded in 1982 by Dennis Gillings, then a professor at UNC Chapel Hill. In 2009, the company moved into their new world headquarters on Emporer Boulevard in Durham. You can see their iconic building from I-40.