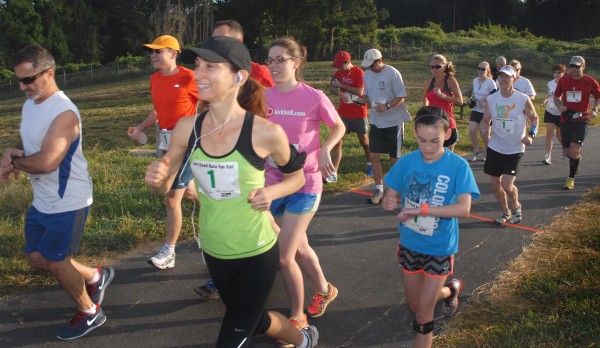 Story by Alisa Wright Colopy, photos courtesy of Fit and Able Productions which offers classes through the town of Cary to motivate people to get fit and active outdoors.

Cary, NC – The Town of Cary dedicated the final section of the Black Creek Greenway this past Saturday, June 1, 2013. There was also a novel twist: signing up 70 Runners to Run 7 miles in 70 minutes or less (at 7am).

Greenway is an Important Connector

“The Cary greenways are a wonderful place to enjoy some time outside with family and friends,” said  John Berar (1:19 run time). “Saturday’s dedication run was a challenging run and everyone had a good time during and after.”

“I’m so glad to be part of a community that values our health and gives us all a way to enjoy the outdoors.” – John Berar

Berar was one of seventy runners invited to dedicate the 7 mile Black Creek Greenway  from Lake Crabtree at the Old Reedy Creek to the greenway hub located in Bond Park.

Black Creek is the Town’s longest and most popular greenway due in part for its length and its connection to other important recreational and open space areas.  From Bond Park it connects to other trails, most importantly, the White Oak Greenway which is presently made up of 4.8 miles of trail sections and will eventually connect to the American Tobacco Trail as a continuous trail of over 7 miles in length.

Finisher Don Merritt (1:17:22) said “this event was a great opportunity to get exercise with some friends and neighbors and to enjoy the 30-year effort by the Town to create a wonderful greenway system. Everyone should get out and try it.” And, many people did.

Doug McRainey, Director of Parks, Recreation and Cultural Resources, led the dedication ceremony thanking the many town staff and community volunteers for their contributions to the greenways final segment which took 10 months and $617,585 to complete. A $494,068 SAFETEA-LU grant covered much of that price tag.. The entire project cost $5.5 million with $2 million from grants.

Runner Nick Gibson believes this was a good investment.  “A Greenway is a place where good things happen – whether it’s taking an evening walk or a morning bike ride or a run during lunch.”

“I’m new to the Triangle,” Gibson said, “but Cary stood out to me as a place that cares about promoting those sorts of activities.  The inaugural celebrated that, and my wife and I had a great time!”

These supporters, like Bob Whitehead (1:05:34), were “glad to be part of this great community event.”  Bob has  lived in Cary for over twenty years and is very familiar with the greenways but “ as many times as I’ve been to Umstead and Bond Parks, I had no idea the greenway was joining them, nor that it was part of a trail that would eventually extend 2900 miles from the Maine-Canadian border to Key West. I hope to bicycle it someday with my son.”

Ten years ago Cary earned the “Fit Community” designation.  The Town continues to support community fitness with plans to extend  the greenways to reach all Cary neighborhoods.

See the Map of the complete Phase IV section.