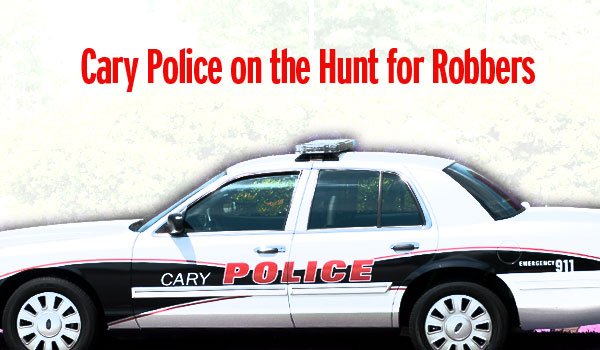 Cary, NC – As we imagine the future of Cary, it’s good to remember that, by some measures, we have more in common with a small city than with a small town. This week, Cary Police put out a call for help solving two robberies – one in the early hours of Sunday morning, another around 9:00 AM on Monday.

The two robberies are not believed to be connected.

The Town of Cary Police Department is asking for your help in identifying and locating two suspects who donned black from head to toe and robbed Vantage South Bank (formally Crescent State Bank), 1005 High House Road, on Monday, June 3.

Just after 9 a.m., the armed suspects confronted bank employees and demanded money. Although they fled on foot, officials believe they are now traveling in a red passenger car. No injuries were reported.

This robbery does not appear to be related to the weekend armed robbery on SE Maynard Road.

The Town of Cary Police Department is asking for your help in identifying and locating suspects involved in an overnight commercial armed robbery.

Just after 3 a.m. Sunday, Cary Police responded to the 24-hour McDonald’s at 869 SE Maynard Road. After entering the building and flashing a weapon, two black males, medium build, fled the scene by foot with an undisclosed amount of cash.

Suspect #1 is described as a tall, skinny, black male in his early twenties, 5’10-6’00 in height, wearing a blue hooded sweatshirt, sunglasses, orange gloves, dark athletic pants with white stripes, and a blue backpack; the suspect’s face was covered with camouflage bandana.

Suspect #2 is described as a tall, skinny, black male in his early twenties, 6’00-6’03 in height, wearing a dark-colored hooded sweatshirt, sunglasses, black gloves, and blue jeans; the suspect’s face was also covered with a camouflage bandana.

Multiple employees were in the restaurant; however, no injuries were reported.

Anyone near the area during the time of the armed robbery or who may have information related to this crime is encouraged to contact the Town of Cary Police Department at (919) 469-4012 or Cary Crime Stoppers at (919) 226-CRIM(E). Crime Stoppers pays up to $2,500 for information resulting in the arrest or indictment of those responsible for committing certain types of crimes. All calls will be kept CONFIDENTIAL at caller’s request.