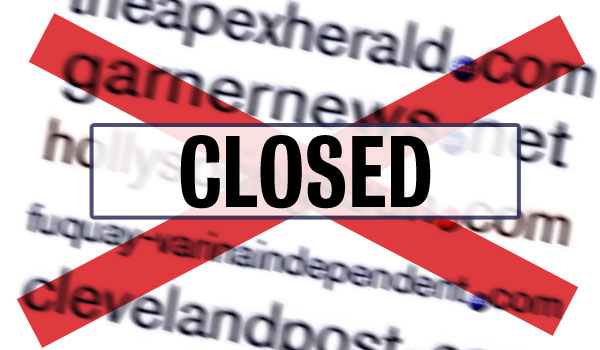 As reported this morning in Triangle Business Journal and elsewhere, Apex Herald, Holly Springs Sun, Garner News, Fuquay-Varina Independent and Cleveland Post will all close their doors on August 1, 2013.

The five are owned by Civitas Media, headquartered in Davidson, NC. Civitas has 15 papers in North Carolina, according to TBJ, and more than 30 total papers in 12 states.

The company is pursuing a strategy away from suburban markets toward more rural communities.

Longtime readers of Editor’s Journal will recall my thesis that traditional newspapers have largely abandoned the smaller communities surrounding the big towns, creating a community news vacuum. That’s why we started CaryCitizen.

I wish Civitas well. Their mission to serve rural communities is a noble one. But the string of newspapers they’re closing in the Triangle represent an opportunity lost, not an expense item cut.

I feel bad for the local media people involved. But something better might be ahead. New media jobs are destined to grow in the Triangle.

I can tell you this: other new media publishers in the Triangle will see this as an opportunity. Don’t be surprised to see hyperlocal internet journalism pop up in the towns abandoned today by their newspapers.

Story and illustration by Hal Goodtree, Publisher of CaryCitizen.

Robert Plant Rocks Out in Cary
Scroll to top