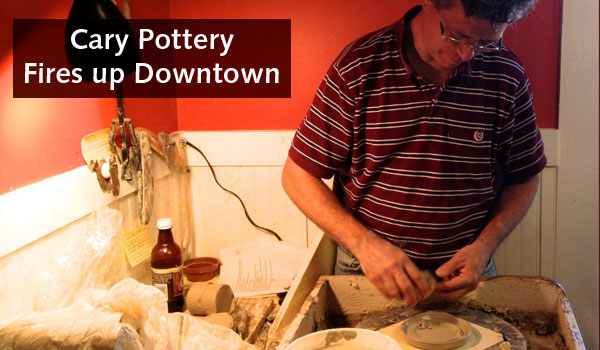 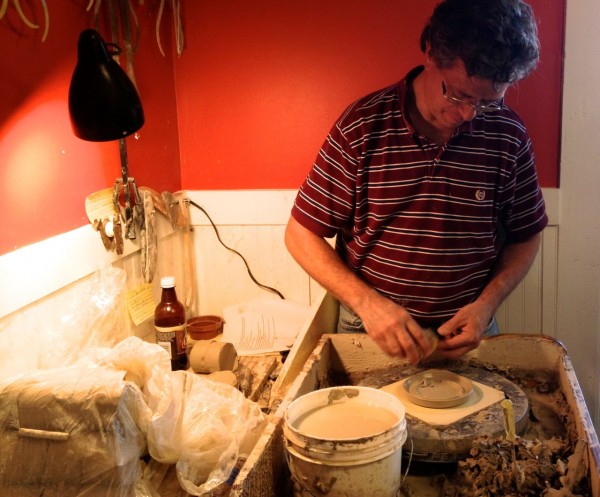 Cary, NC – Cary Pottery is firing up downtown. It’s a watershed moment for potter Kenneth Neilsen, but also for downtown Cary and the local arts community.

Cary Pottery Fires Up in Downtown

Kenneth Neilsen has been turning pots since 1980 when, as a kid, a neighbor had a kick wheel that he tried, and successfully made a pot. That experience hooked him on a lifelong journey that has led to the opening of Cary Pottery on Dry Avenue across from the Cary Arts Center in Downtown Cary.

Neilsen and his former partner Don, worked together as DK Pottery for over 32 years first in Cary and eventually ended up in Sanford. The business was and is very successful.  About a year ago, Neilsen felt it was time to have something of his own. The momentum building in Downtown Cary seemed like excellent timing to begin to look for space here.

As he was beginning talks with the Town about the old Mitchell Pharmacy building (next door to the new Cary Theatre), his wife Glenda Westbrook- Neilsen and her dad were driving around town and saw the For Sale sign on the current location.  With the Arts Center, proposed Park and new hotel coming and annual sculpture show it just clicked.  He did mention it took a while to get used to the new space, which is quite a bit smaller than the Sanford location, but it is all his.

The main space of the house includes three rooms to display pottery that is for sale, the work room with the wheel, a kitchen and a bathroom. At the back was added a room for 2 kilns, one electric and one gas. Why two? Neilsen explained that they have different uses. Certain glazes need the “reducing atmosphere” of gas, such as his signature copper red. And other glazes are fine in electric which is an “oxidizing atmosphere”- such as a cobalt blue. If a red goes in the electric kiln it won’t be red., but instead a weird green.

The Ground Floor of Something Big

The location of the new Cary Pottery shop has already proved successful. The building was formerly a residence of Carol Ann Christmas who still lives in town.

“It seemed to be a great place to open a pottery studio and gallery given all the changes coming to downtown. Especially (to be) across the street from the Arts Center which is really the anchor of this end on Academy”…He felt he was “getting in on the ground floor of something really big taking place in Downtown Cary”

Cary Pottery had a soft opening in May, after closing up Sanford in October. Folks wander in after a class to see what he’s working on and are encouraged to watch him turn a pot, or pull work out of the kiln. He doesn’t teach classes, explaining that “it was so easy for me, I thought everyone could learn it. ” And he doesn’t really have the patience with beginners. He is happy to show folks what he does and offer pointers if people have questions. 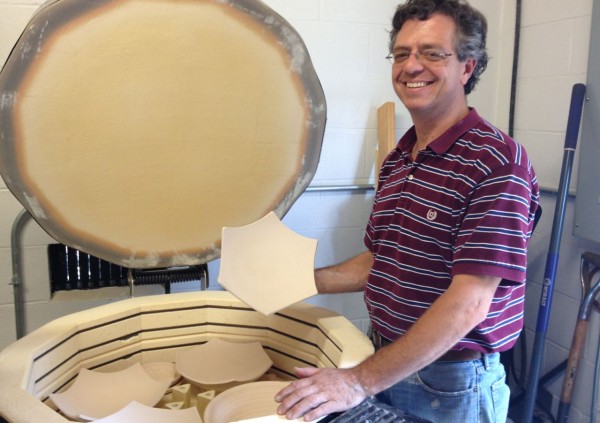 Everything in the shop is signed Cary Pottery and is made from start to finish in the studio. Neilsen makes his own special blend of clay (called a clay body) from various dry ingredients found in bags in the back of the studio) and he creates large buckets of his signature glazes. If you buy a pot here, it is an excellent souvenir of Cary. In fact some of his work has already traveled to Denmark and beyond as travelers visit and want a gift to take back with them. Having a new hotel nearby won’t hurt business either.

On display in the gallery are all manner of housewares (platters, bowls, plates and mugs), vases, vessel sinks (for custom baths) , religious objects. In the studio when I visited, Kenneth was turning a large series of small vases that will be fired and glazed in time for his upcoming Grand Opening during Cary’s Final Friday Art Loop on July 26th. 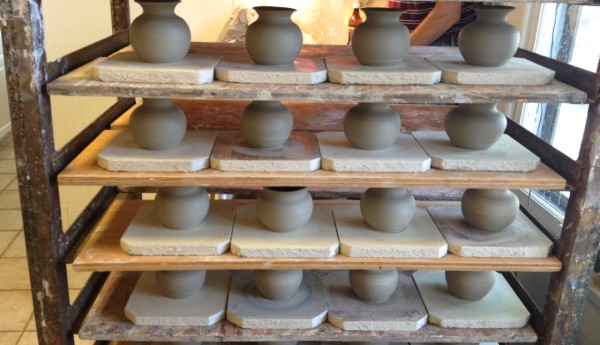 Kenneth says he is in the shop every day making pottery. He isn’t always turning pots, he may be glazing, or trimming or  loading the kiln, but visitors are encouraged to stop by and say hello. You may be surprised at how this unique shop will help transform this little corner of Downtown Cary.

At Cary’s Aradia Fitness, Pole Dancing Stays In The Family
Scroll to top
%d bloggers like this: