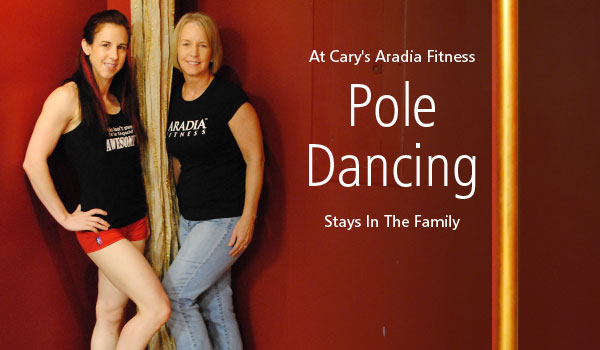 Cary, NC — When Terri Kerr opened America’s first Aradia Fitness franchise in 2007, few would have considered trying pole dancing as their weekly exercise regimen. But the sport has quickly merged towards the mainstream over the past six years, thanks in large part to the success of pole dancers on television shows like America’s Got Talent. Now in her fifties, Kerr is passing ownership of the successful studio on to her daughter, Dakota Fox.

Fox had been working as an instructor at Aradia since 2009. Recently, she’s competed nationally and garnered thousands of views on YouTube as part of her Head Over Heels pole dancing troupe. Despite her own virtuosity on the pole, though, Fox says what she appreciates most about the small studio is the diversity of its clientele.

Our average client is probably in her 30s or 40s. But we’ve had women as young as 60 or 70 in our classes before. Many are married, but it’s sometimes hard to tell, since they take their rings off to work out. There’s a really personal aspect to what we do. We really get to know every client that comes in.

Kerr says she started the studio in part for herself. A former collegiate gymnast, Kerr had been struggling to find a satisfying exercise routine as she aged — then she discovered pole dancing. Fox says Aradia Fitness has provided dozens of women like her mother with a work-out solution that they love.

When you find something that captures your attention, motivates you, challenges you — you’re going to stick with it. Many of our ladies have been coming for quite some time, some as long as three years or more — and they keep coming back.

For Kerr and Fox, Aradia Fitness has never been just about exercise. The studio is a space of freedom and empowerment for women, they say, and Fox says she plans to keep it that way.

Pole dancing, you learn it’s okay to appreciate your body just the way it is. When you’re with the other women in class, and you hold yourself up on the pole for the first time, and then everyone in the class is clapping and cheering — that’s what helps them blossom. That’s why we teach.

Story and photo by Austin Cooper.

Cary Pottery Fires Up in Downtown

Art: What to Do with 164 Old Ballet Shoes?
Scroll to top