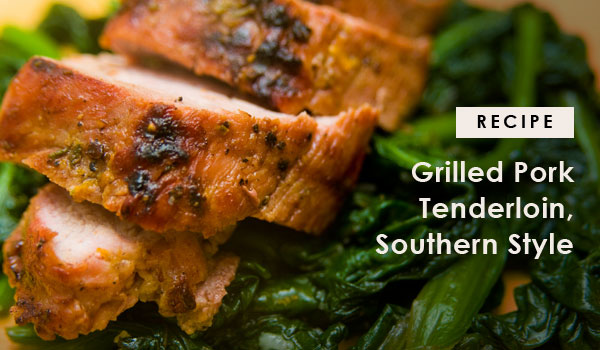 Pork is such a versatile meat – ham, bacon, ribs, chops and yes, pork tenderloin. That’s not even counting chitterlings.

In fact, pork tenderloin is popular across the world. That’s why you see a lot of “fusion” recipes for pork tenderloin – soy, Habanero, vodka, lavender – it’s all out there.

But how about a true Southern recipe?

I’m not sure there is an official blueprint for pork loin Southern style, but if we start with barbecue sauce, add peaches, maybe a little vinegar and a shot of bourbon, we should be headed in the right direction.

If you object to bourbon on principle, you can substitute a splash of Cheerwine instead. Let’s see our readers in New York and California find that in the supermarket!

Trim the meat of any fat and silverskin. Pop it in a baking dish or large ziplock bag.

Combine the marinade ingredients and fork-whip it a little until it’s smooth. Pour the marinade over the pork. Seal the ziplock (or cover the baking dish) and refrigerate.

(About marinading times: most recipes say “marinate for 40-50 minutes” or some such thing. Seriously, if you marinade most things overnight, you will get a much richer flavor.)

Fire up the grill to a medium heat.

Keep the tenderloin off any open flare-ups. Cook for 20-30 minutes, turning the meat every five minutes or so.

The meat will shrink considerably – about 15% – when it is fully cooked. For those of you who use a meat thermometer, 155° F minimum at the center.

If you’re not sure if the meat is done, take it off the grill onto a cutting board and slice it in the middle. If it’s not cooked, throw both pieces back on for a few minutes.

When the meat is cooked, cover with foil and let sit for ten minutes before cutting into 1/2″ slices.

While the tenderloin is grilling, pour the leftover marinade in a pot and bring it to a boil. Lower the flame and let it simmer for ten minutes. The marinade will thicken a little and you can drizzle it over the cooked pork.

Biscuits always go well with a Southern meal. As for fresh vegetables, cucumbers and tomatoes are in season. Or sautè up some spinach or Swiss chard with a little salt, pepper olive oil and a dash of vinegar.

Sliced watermelon makes a nice summer dessert, but no one ever objects to cake.

Food coverage on CaryCitizen is sponsored in part by Thai Spices & Sushi on Cary Parkway at the corner of High House Road.

RailHawks vs NY Cosmos and other Weekend Events