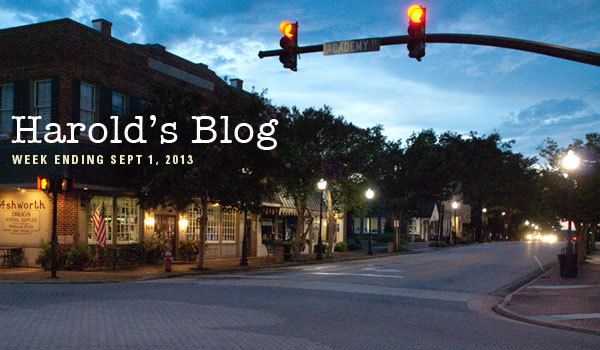 Cary, NC – Unlike last week this was a very slow week and consisted mostly of private meetings.

Monday was my wife’s birthday so I spent time with her.

Wednesday I taped the September episode of Cary Matters with Lori Bush. Our main topic was about changes on Walnut Street. The second segment was spent addressing questions about the Maynard Water Tank across from Cary High School. We did all three segments on the first take and were finished within half an hour.

It might be of interest to know that Cary Matters is written by the host of the show. I wrote it for the first two to three years and have been sharing writing duties with council member Robinson since. But council members are not allowed to participate in Cary Matters while running for office so I am currently writing all the shows.

The process begins with an initial draft which is due to the Public Information Office by the 15th of the month for fact checking. During the time of fact checking the co-host is invited to make any changes. The final draft is sent out about a week in advance of the taping. The taping usually occurs the last Wednesday of the month.

Do More with Technology

Wednesday night I had a private meeting with folks interested in getting the town to do more with technology. That meeting lasted a couple of hours.

The rest of my week and weekend were spent in private meetings.

Council and the public were notified on Thursday that our new downtown manager will be Ted Boyd. Boyd was selected from a pool of 225 applicants from as far away as Washington, Florida and New Hampshire. Boyd and his family will relocate from Charlotte, where he is currently the Director of Historic South End at Charlotte Center City Partners.

Emails from staff this week included a response to address a citizen’s concern about the closing of the Cary Employment Security Commission office. Staff explained that some offices are seeing changes as part of the Department of Commerce reorganization, Cary is not one of them.  They intend to continue providing services that include keeping the office open the same hours it has always been open.  The state official did acknowledge that they had lost some employees.  Due to budget constraints, they did not renew the contracts of several temporary employees.  There are currently 4 regular staff members plus the manager working at the Cary office.  In addition, they are recruiting for a temporary position which would last through June 30, 2014.

This week will be busier than this week but still not that busy. Highlights include a work session on Imagine Cary on Tuesday and the Chamber of Commerce banquet on Wednesday night.

At Tuesday’s work session the staff will present a preliminary report of the draft Value Statements and Vision Statement to be discussed in the work session.  The report’s introduction provides a description of the process used to generate the statements, defines key terms, and describes the organization of the material.

Well that is all for this week. My next post will be on Sunday September 8th. Although I have Facebook and Twitter accounts those are not the best means of communications with me. Please send all Town of Cary questions or comments to Harold.Weinbrecht@townofcary.org and email personal comments to augustanat@mindspring.com.