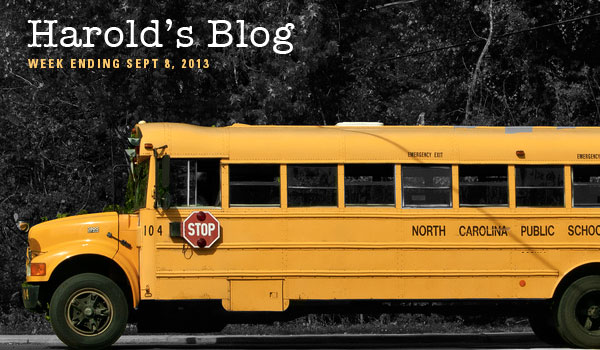 Cary, NC — This week was slow compared to a normal week but included a few significant events.

Monday was a holiday and I used the time to play tennis, run, swim, and be with the family.

Tuesday it was back to work. The council held a work session on the progress of our two year planning process Imagine Cary. There are four phases to this multi-year process and we nearing the end of phase one.

To date, many events were held to gather public input. That input was recently presented to the CFTF (Committee for the Future) who then distilled the information into a Vision and Values Report.

Their draft included twelve topics with supporting value statements. Those topics were:

These statements will now go to the public for their opinion. That is, we are basically asking: Here is what we think we heard from you. Did we get it right?

The work session ended after about two and a half hours.

At the work session there were some statements made about affordable housing which prompted a media call to me the next day.

We believe it is important for our firefighters, police officers, teachers, and others who are in service roles (or have served) to be able to live in our community. We have an affordable housing department and no plans to stop our pursuit of housing of all types. It is important to understand that this council strongly believes in the highest quality housing possible which includes affordable housing.

I believe we will do whatever we can to insure the highest housing quality and quality of life for all our citizens.

Wednesday started with meeting executives from MetLife who official announced that their office buildings will be located in Weston on Crabtree Lake. We talked mostly about amenities in the community. They not only want to get to know Cary but they want to be an integral part of our community. We are blessed in so many ways to have MetLife come to Cary.

Wednesday night I attended the annual Cary Chamber of Commerce banquet with the main attraction being Governor McCrory. The event was sold out and the Prestonwood banquet room was filled to capacity. Attendees included all of the Cary Council and Wake County Commissioners. In addition, there were State Senators and State Representatives, school board members, and the major business leaders of our community.

I had the pleasure to talk with some of these leaders during the cocktail hour. From the conversations I heard things are looking up for our local businesses.

After the cocktail hour we sat at our tables to hear opening remarks from Chamber officials which was followed by dinner. As is typical with other governor visits, the governor showed up about mid meal. I was fortunate to be seated next to him. He did not eat and only drank a diet coke from a can which was brought to him by one of his staff members.

He was very kind and gracious and praised what we were doing in Cary. His remarks were given in a conversational format with Senator Barringer who represents Cary and included statements about economic development, jobs, and education. I was very impressed that he stayed through the remainder of the banquet to witness the awards. I had the honor to present the Business of the Year Award to Highwoods Properties who worked through many difficulties to make the MetLife deal work.

I thought the banquet was a huge success and it ended shortly after 9 PM.

I believe the School Bonds are essential to the health of our school system. Our teachers and schools are already working at a disadvantage. The last thing we need to do is make our teacher’s job more difficult with extreme scheduling and overcrowding. This could also have a significant impact on our communities.

One of the top questions potential residents and businesses always ask is about the school system. If our school system suffers we all suffer. Not only with the education of our children (our future) but with economic development. We absolutely, positively, cannot let that happen. Our children and our schools must always be the highest priority.

Sunday I joined Steve Daniels (WTVD) and Bill Sears (development of Searstone) to be a judge at Prestonwood’s 25th anniversary celebration. We had the difficult task of picking a winner of all the great kid entries in the bicycle decorating contest and the winner of the golf cart decorating contest.

During my time with the other two judges I heard stories from Bill Sears whose family has been in Cary for generations (eight). He said that most of the land that Prestonwood is on was part of his families land a few years ago. He also talked about being born on the site of Searstone.

BTW, Searstone is set to open on November 1st.

Emails from citizens this week included several requests for events and letters of recognition, and thank you notes from people who have received help from the town.

This week will be a busy week starting with a mini retreat on Tuesday. There will also be a regularly scheduled council meeting on Thursday and a few other events.

Well that is all for this week. My next post will be on Sunday September 15th. Although I have Facebook and Twitter accounts those are not the best means of communications with me. Please send all Town of Cary questions or comments to Harold.Weinbrecht@townofcary.org and email personal comments to augustanat@mindspring.com.

From the blog of Cary Mayor Harold Weinbrecht. Photo by Tom May.

Gleaning: Helping with the Harvest to Feed the Hungry
Scroll to top