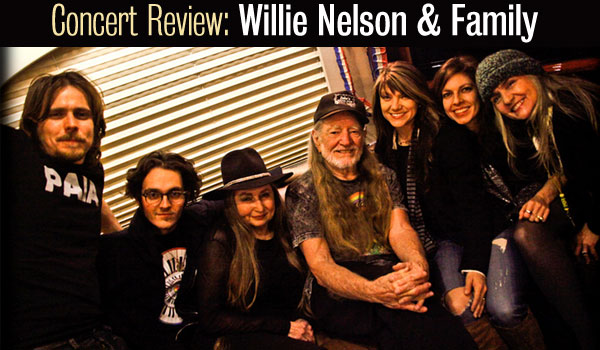 Cary, NC – The Willie Nelson concert at Koka Booth Amphitheatre last Friday night (September 14) felt more like a quaint family reunion than a show. The renowned country musician was preceded by his son, Lukas, and accompanied by his eighty-two year old sister, Bobbie.

Lily Meola started the night off right with an intimate performance accentuating her lovely voice. With the help of Lukas on guitar, she sang a rather catchy rendition of Johnny Cash’s classic, “Folsom Prison Blues.” When her set finished, Lily thanked the audience beaming ear to ear and gracefully left the stage for Lukas to take over.

Warming the Stage for Dad

When the band was ready, Lukas took the stage and performed a truly admirable version of his dad’s song, “No Place to Fly,” that he helped to write. Following Lukas’s charming version of the Beatles’ love song, “Something,” the band roared into “Four Letter Word.” The fantastic performance came complete with a stunning harmonica solo. As he left the stage, Lukas welcomed Willie to the stage by saying: “Dad’s up next.”

When he walked out under the Koka Booth lights, you could tell where Lukas got his presence. Willie Nelson humbly took the stage, opening with “Whiskey River Take My Mind,” followed by “Still is Moving to Me,” offering a wonderful first glimpse into his remarkable catalogue. The audience cheered along to “Beer for my Horses,” singing “We’ll raise up our glasses against evil forces.”

Willie seldom broke up the music with any idle chit chat, only stopping to thank the audience for listening and giving shout outs. Before playing “Good Hearted Woman” to pay homage to the country great, Willie said he had to “play one for Waylon.” Even in the country music culture, Willie Nelson truly is a family man.

One of the best moments of the night was an elegant piano piece by Willie’s adorable sister, Bobbie. The two make quite the pair on stage, showing that family bonds are the strongest of them all. A few other members of Willie’s band played some excellent solos on “Seven Spanish Angels.”

As a man that’s been a traveling musician for the better part of his life, Willie has gotten quite accustomed to a life on the road. You could really see the importance of this part of his life when he sang “On the Road Again.” Lukas, who has followed in his father’s glorified footsteps, came back up to play some twangy lead guitar and sing a couple ditties with his old man.

The audience and the Nelsons belted out the crowd-pleaser, “Hey Good Lookin’,” and everybody tapped their feet together. “Heaven or Hell,” offered some insight into the good times and the bad times, from a man who has truly lived a rewarding life.

The warm atmosphere provided by Willie Nelson and his clan really did make Koka Booth Amphitheater feel like home.

Travis Toth, a senior at NC State University, writes about music for CaryCitizen. Photos from WillieNelson.com.

Mission Post: A Place for Non-Profits
Scroll to top