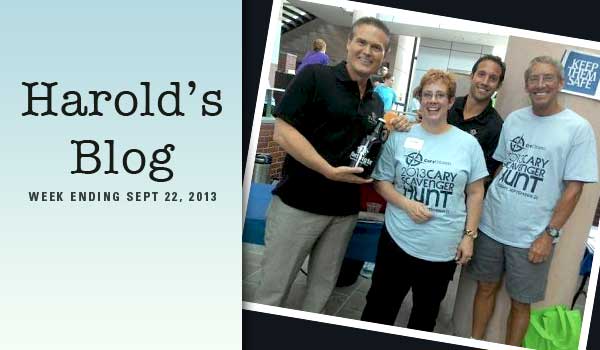 Cary, NC — This week included a few meetings and events but other than that it was not very busy.

Monday I had a private meeting.

Tuesday my first meeting was with the town manager and a member of the administrative staff. We talked about providing input for a Wake County Public Schools grant proposal, the council-staff retreat in January, upcoming work sessions, and downtown issues. Our meeting lasted about an hour.

Tuesday evening I met with a member of the Public Art Advisory Board who is part of the artist selection board for the downtown park. It seems that one artist had risen to the top and we spent most of the time looking at examples of his work. I was then asked for any comments. I believe future art has to be something that would be enjoyed by those that don’t particular care about art and also enjoyed by those that are looking for something very artistic and unique to Cary. I realize that is a tall order but if the artist stays away from the abstract and creates something unique, as he has done in the past, it will be something that everyone will love. And his many past examples show he has the talent to make this happen.

Wednesday I met with Cary Chamber executives and members of the Economic Development Committee for our quarterly meeting. Information from that meeting included:

Our meeting concluded with a report on the Cary Chamber’s branding campaign called “Cary On”. Information on the logo was presented. Green was chosen as it is the color that most symbolizes the Town of Cary. Green also means “go” and makes the point that Cary is on the move, growing and active. The power, or “on” button refers to Cary’s reputation as a “tech town” with historical foundations in IBM and current foundations in SAS.

Thursday the council held a work session to finalize details for the January council-staff retreat. The retreat will be held at the Blockade Runner in Wrightsville. The council will travel separately from the staff and arrive by Thursday night at 5 PM. Since more than three of us are gathered it is important for the public to know where we are and what we are doing. We will be having a social dinner (at our expense) at the Oceanic restaurant. It is not a private event and the public is allowed to witness it. We will not be discussing any town business and must focus all our conversation on personal matters.

The actual retreat will begin the next morning and will run until Saturday, January 18th. Topics to be discussed in order of priority include: 1) Economic Development – How have our strategies worked and what are the results? What is our track record? What is the significance of the Chamber’s involvement? Do we need to update the 2005 Economic Development Plan? 2) Priority Based Budgeting – A check-in to make sure that staff assumptions about priorities and goals are correct. 3) Civic engagement – A discussion about messaging and branding.

The council-staff retreats are extremely important. It sets the direction for the coming year(s). And being away from local distractions is crucial for council and staff so that they can spend two solid days totally focusing on the town. BTW, cost differences for an in town and out of town retreat are approximately the same.

Saturday morning I gave remarks and read a proclamation at the second annual Capital Area Rally for Recovery. The purpose of this event was to promote awareness of long term recovery resources available to North Carolinian’s for the disease of addiction. My remarks included my personal story of what it was like to grow up with a single alcoholic parent. I was at this event about 45 minutes.

I next headed to downtown Cary to be a part of the Cary Scavenger hunt. I was joined by council member Bush and our spouses. Out of a possible 10,000 points we probably were in the 5000+ range. The winners had 9000. Our problem was not having enough time to get to all the items. Usually I am a judge at the Scavenger hunt but I wanted to try being a competitor at this one. We decided beforehand that we would donate any prize we would win. Of course, that was not a problem. The experience was a lot of fun plus I got to spend time with my wife, Mrs. Bush and her husband Greg. The Scavenger Hunt went from 9 until 1:30 and awards and the reception lasted until about 3:30.

Sunday I attended the Parks Recreation and Cultural Resources Volunteer Appreciation Picnic. I spent time walking around and talking to a few people. I even played pickle ball for the first time. While pickle ball was fun, I think I will stick to tennis. Cary is blessed to have so many volunteers. That is one of the reasons we are one of the greatest places to live, work, play, and raise a family.

In emails from staff this week the council was informed that a sewer line replacement on Farmington Woods Drive will occur this week. Unfortunately, there are about ten trees on the sewer easement that need to be removed, (all pine and gum trees).

Not only are the trees in the way, but once the town crews start digging, they are going to damage the root system which will make the trees very weak. So the chances of survival will be slim especially during a storm. Luckily there are no houses visible to the respective area.  The only close structure is the Tree of Life Lutheran Church.  Town staff has talked to the president of the church to make him aware of what the town is doing and the possible tree loss.

There will be no street closures or traffic problems as all work will be done on the easement.

Emails from citizens this week included a concern about the new street light policy, a request for a juggling festival in downtown, a concern that the new I540 was adding additional traffic to Davis Drive, a request to add backyard ducks (since we have backyard chickens), a request for more sidewalks on Chapel Hill Road, and a request to “get away” from fossil fuels.

This week will be busy with a taping of Cary Matters and a regularly scheduled council meeting.

Well that is all for this week. My next post will be on Sunday September 29th. Although I have Facebook and Twitter accounts those are not the best means of communications with me. Please send all Town of Cary questions or comments to Harold.Weinbrecht@townofcary.org and email personal comments to augustanat@mindspring.com.

Booth Amphitheatre Shook Up by Alabama Shakes
Scroll to top