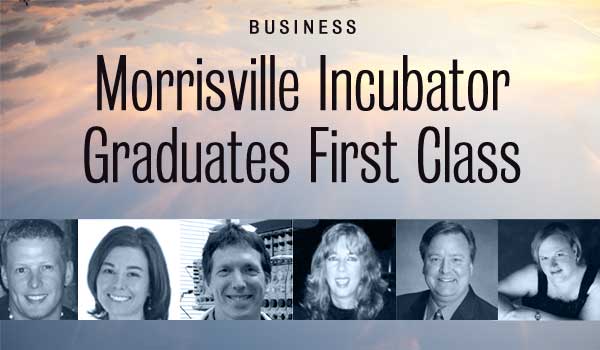 Morrisville, NC – Five Companies are set to graduate as the first HOTTovation class, a Morrisville incubator  program initiated by the Morrisville Innovation Foundation.

The HOTTovation program, which began March 1, 2013,  provided office and meeting space for the five start-ups along with mentoring  and memberships in CED, TiE Carolinas and the Morrisville Chamber of Commerce.

The Five Companies that have successfully completed the program have technology in common. They are (in no particular order):

Program participants most frequently cited mentoring as the most valuable asset of the program.  HOTTovation board members and mentors affiliated with TiE Carolinas provided ongoing guidance to the businesses.

Paige Julianne Sullivan, CEO & founder of Concert Telecommunications stated, “We were able to get unparalleled support from mentors, other entrepreneurs, and other organizations that otherwise we wouldn’t have been able to access as readily, which has brought more resources and success to the company.”  Finder411 also found the mentoring to be the programs best benefit.

Ed Burgard, co-founder of Dignify Therapeutics stated, “The FastTrac course has given us the tools to structure our business and reach out to potential investors and partners.”

Samra Busic-Janish and Jennifer Surovy are co-founders for chAPPter1, which provides classes teaching children how to develop mobile apps.  They were struggling to find a home for their classes.  Through connections made with HOTTovation, Busic-Janish and Surovy became a vendor with Morrisville’s Parks and Recreation department and is using Morrisville’s historic Christian Church for its classes.

Jason Barker with FreeYourMemory.com is the classic entrepreneur working full-time while trying to launch a new business.  Barker says, “The program gave my company more prominence and helped open doors for us.”

HOTTovation board member and serial entrepreneur John Ramsey stated, “Every start-up is different.  By providing for some of their short-term needs and arranging for time with mentors in the Morrisville Innovation Foundation’s network, we are enabling these companies to reach their next level of growth, whatever form that might take.”

An official graduation celebration will take place in a closed meeting at the Morrisville Chamber on September 25.

The Morrisville Innovation Foundation will open requests for applications for the 2014 program in early spring.  For more information, visit MorrisvilleInnovation.org.