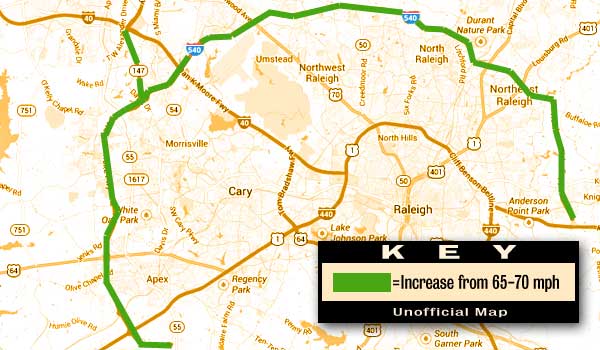 Cary, NC — Three Triangle roads are getting faster with a planned increase from 65 to 70 miles per hour.

The increase in speed from 65 to 70 mph, approved by the NC DOT, covers three roads:

Basically, all of 540 plus the new portion of 147 south of the interstate.

The change takes effect at the end of September.

It’s all the same road. But a bit of a legislative trick was required to toll the newest portion of 540 south of I-40 in Western Wake.

State law prohibits retroactively tolling an existing road, so the new extension had to technically be a new road.

For those who use 540 and the southern part of 147, the increase in speed will shave a few more minutes off the daily commute.

Here’s an unofficial map of the new high-speed routes.