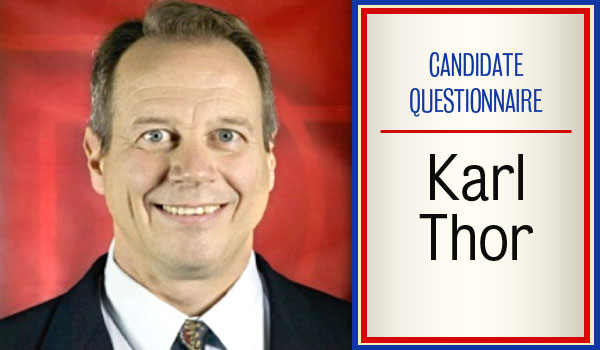 Cary, NC — Continuing our Candidate Questionnaire series, we hear from Karl Thor who is running as the challenger for Cary Town Council, District A.

As we have done in previous election cycles, we sent a list of three short questions to all the candidates for office in Cary. We do not edit the answers but provide a forum for the candidates to speak to our readers in their own words.

Read all the candidate answers to our questionnaire under Elections.

We encourage all citizens to go to the polls in Cary on Tuesday, October 8, 2013.

I am running for Cary Town Council District A representative because our incumbent “representative”, is not representing us, and this is causing us higher taxes and fees, as well as destruction of valuable rural and natural habitat that enhances property values in District A.

Across her  14 years on council, statistically valid Town surveys show that excessive growth is the #1 concern of Cary residents in every survey.  Despite this overwhelming concern about growth, Cary remained one of the fastest growing cities in the nation!  I don’t mind when a politician dismisses our concerns, but when it also costs us money to pay for something we don’t want, I feel an obligation to challenge that politician.

Across the 14 years that Ms. Robinson was on council, our sewage fees have tripled, our waste collection fees have doubled, and water fees have increased 22%.  Furthermore, the $80 MM debt the town approved this past year will raise our property taxes by 12%.  If the $810 MM school bond is passed to pay for schools needed to support Ms. Robinson’s pro-growth position, our property taxes will increase another 9.5%.  Finally, Ms. Robinson supports a 7.5% increase in sales tax to pay for mass transit, which is impractical for District A residents who work in RTP.  We will pay for something we won’t use.

Finally, Ms. Robinson cast the swing vote for approval of the excessively large shopping center at the corner of Davis and High House Drive…against protest petitions signed by over 1,600 of the people she is supposed to “represent”.

Q2 – What are your top 3 priorities and how will you get it done?

I was born in Pittsburgh, PA., the son of a middle class bus driver who never finished high school but who nevertheless instilled in me the value of hard work, a down to earth attitude, and commitment to community.  I attribute much of my success as a business person to my father. I am a co-founder and president of Dignify Therapeutics, Inc., a pharmaceutical start-up company aimed at much needed therapies for spinal cord injured patients.  I am also a founder and principal partner in Eye d’Neau Inc., a newly-formed, internet-based company that develops and promotes local musicians and artists from amateur- to entry-level professional positions.

I received my BS and PhD degrees in Pennsylvania and worked at the NIH in Bethesda, MD, and Eli Lilly in Indianapolis, IN, before moving to Cary in 1994 to become an RTP biotech entrepreneur.  I have founded 3 prior companies: GenuPro, a subsidiary of PPD Inc. (a local clinical research organization); Dynogen, which raised $100 million in venture capital; and Urogenix, a subsidiary of Astellas Pharma Inc. (a Japanese pharmaceutical company). And I served as an NIH and VA funded scientist at Duke University.  In addition to being an internationally-recognized scientist who has published a dozen book chapters and 75 peer-reviewed manuscripts in scientific journals, I sing, write songs, play the guitar, and perform professionally, as well as at regular charitable performances for NC Conservation Network and the Western Wake Farmers Market.

I have been married for 32 years to my wife, Karen, who is a highly successful professional herself, having been Sr. V.P. and CIO at Suntrust Bank and currently is employed by a financial software company.  We have 2 grown children, a son working in Raleigh managing a catering company and a daughter pursuing her Master’s degree in Florida.  I have no political party affiliation, and my wife is a registered Republican.  I have been a member of various environmental groups and served on the Sierra Club’s Political Candidate Endorsement Committee.  I am a member of the DHH Steering Committee, a Cary community activist group, since its inception in 2007.