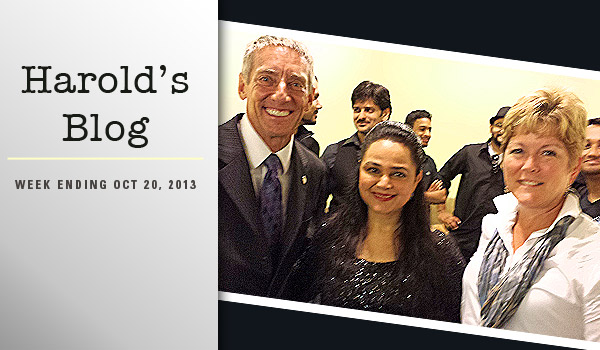 Tuesday I did a filmed interview with Dr. Steve Channing for a documentary on the North Carolina Indian community.  Dr. Channing is an historian, author and regional Emmy Award-winning filmmaker. Beginning in the 1980s, he began to communicate stories about the American past through documentary film and educational television. In our interview I talked about how Cary has changed over the decades and how the Indian community has not only been a part of that change but has become an integral part of our community. Our interview session lasted less than 30 minutes. Dr. Channing expects the documentary to be on UNC TV in the fall of next year.

After my interview I met with a foreign exchange student from the Ukraine who, for a school project, had to interview and take pictures with an elected official. She interviewed me during a recent litter sweep of the town. This meeting was to take a few pictures in town hall. She brought a member of her host family with her and another exchange student.

Wednesday I attended the Capital Area Metropolitan Planning Organization (CAMPO) meeting in Raleigh. Our agenda was short and only had one item of significant interest for Cary which was the prioritization process, called SPOT, for projects beginning January 14. The new criteria include:

Our meeting lasted about half an hour.

Thursday the council held a four hour work session that covered five topics. First the council, staff, advisory board members, and citizens did a downtown walking tour to get updates on downtown projects. Points of interest included the Jones house which is on schedule with no significant construction surprises and the Cary Theater which should start programming in January.

The council then returned to town all and discussed the Academy Street Streetscape and received an update on the downtown park. Council decided on five details for the Academy Street Streetscape. Pavers were selected and will not have beveled edges so that ladies in heels can walk without the risk of falling. It was decided not to have an intersection treatment at Academy and Chatham. There is currently a dogwood in the middle of the intersection that most people don’t know is there. The council made “furniture” selections for the streetscape that will include tree grates, park bench seating, trash receptacles, and granite benches. The selection for pedestrian and street lighting was a standard contemporary decorative pole. Lastly, the council decided to have multiple arches across Academy Street. We deferred the decision of lighting the arches until we get more information about tree lighting on Academy Street.

The next part of the work session was on 2014 meeting efficiencies. The council decided to eliminate the two subcommittees (Planning and Development and Operations) because of the small agendas. Instead the information that would have gone to committees will be put on the regular agenda for the entire council. The council also decided to create a meeting for quasi-judicial hearings on every third Thursday instead of regularly scheduled council meetings which are every 2nd and 4th Thursday. The quasi-judicial meetings will be televised. The changes take effect in January.

The fourth work session topic was on rezoning process changes. The council decided that once an applicant has submitted an application then a neighborhood meeting would be required. Council members will be invited to these neighborhood meetings. The council also decided to allow concept plans with conditional rezonings. This will give residents near a rezoning proposal an idea of what is being planned if the use is changed. The council decided that changes to previously approved mixed use plans will be more limited. Significant changes would have to come back to council for a vote rather than be administratively approved.

The last topic of the work session was a legislative update. Council members were provided a list of House and Senate bills that may be addressed in the short session coming up in 2014. Short session only allows previously introduced items or non-controversial items to be considered. One bill of interest was the Interbasin transfer bill. Interbasin transfer is a state approval to allow water to be taken from one basin and deposited in another. Since Cary is on a ridge line, this is very important. In the past, changes to agreements have taken several years. If this bill is passed it would streamline the process which could save Cary $2.5 to $3.0 million dollars. Hopefully, our legislative delegation can help us with this bill approved.

Saturday morning I gave remarks at the Save a Life 5K. Save a Life is a non-profit organization that focuses on prevention and awareness of teen suicides. It was co-founded in 2010 by Victoria Bennis who lost a family member to suicide. After giving a few remarks I ran with the 5 K with those in attendance. It was good event and I even had a decent run time.

Saturday at noon I gave remarks, read a proclamation and lit candles as part of the opening to the Diwali festival. The Diwali festival is a festival of lights celebrated by Hindus around the world. The event in Cary was the 13th and once again drew several thousand people. Around 4 PM I returned for the evening celebrations of Diwali. I was joined by Congressman David Price and we both gave remarks.

After having some great Indian cuisine my wife and I, along with a capacity crowd, enjoyed the Queen of Indian pop Alisha Chinai. This international star has received the Filmfare Best Female Playback Award, the Freddie Mercury Award for Artistic Excellence and the International Billboard Award for her 1996 album, Made in India.

At the end of the show we were all treated to fireworks. My wife and I were honored to meet Ms. Chinai and had our picture made with her. Cary is blessed to have an organization like HumSub to put this event on each year. It is events like this that allow us to know the values, experiences, and talents that each of us have to offer.

This week’s activities include a regularly scheduled council meeting, a meeting of the Mayors Association, and a taping of Cary Matters.

Well that is all for this week. My next post will be on Sunday October 27th. Although I have Facebook and Twitter accounts those are not the best means of communications with me. Please send all Town of Cary questions or comments to Harold.Weinbrecht@townofcary.org and email personal comments to augustanat@mindspring.com.