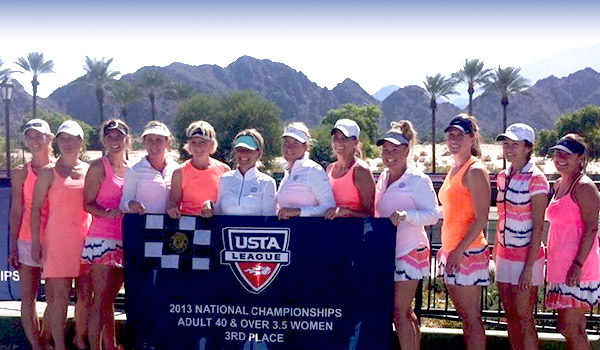 Cary, NC- For the first time in it’s 25 year history, Prestonwood Country Club sent a Ladies 40 & Over team to the United States Tennis Association and they proudly brought home a third place title.

The team, captained by Karen Coe and comprised of 14 members, represented the Southern Section at the United States Tennis Association (USTA) National Championships in Indian Wells, California and competed on October 11.

“Karen’s team, who were playing together for the first time due to recent USTA age division changes, proved to be a formidable opponent,” said Tennis Manager Julie Corcoran. “Overcoming the recent breast cancer diagnosis of teammate Colleen Ueland served as additional motivation to compete for the national title. Their success cannot be credited to any one teammate; their accomplishments were the ultimate display of teamwork.”

For the 2013 season, there were 74 other leagues teams who represented Prestonwood – although only 7 at the 3.5 level for all age levels during the Spring season. The 3.5 designation represents their NTRP (skill/talent) level. The highest level offered in the USTA is a 5.5.