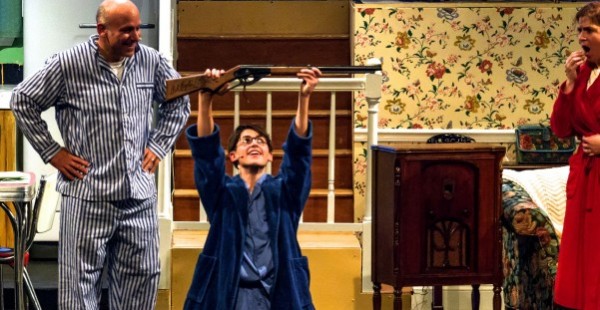 Cary, NC – The Cary Players opened their 6th production of Jean Shepherd’s A Christmas Story on Thursday night at the Cary Arts Center to kick off the Holiday season. Ralphie and his wish for an “official Red Ryder carbine-action 200-shot range model BB rifle with a compass and a thing that tells time built right into the stock” and his scheming to make his parents buy this for his Christmas present is a story well-known to all. 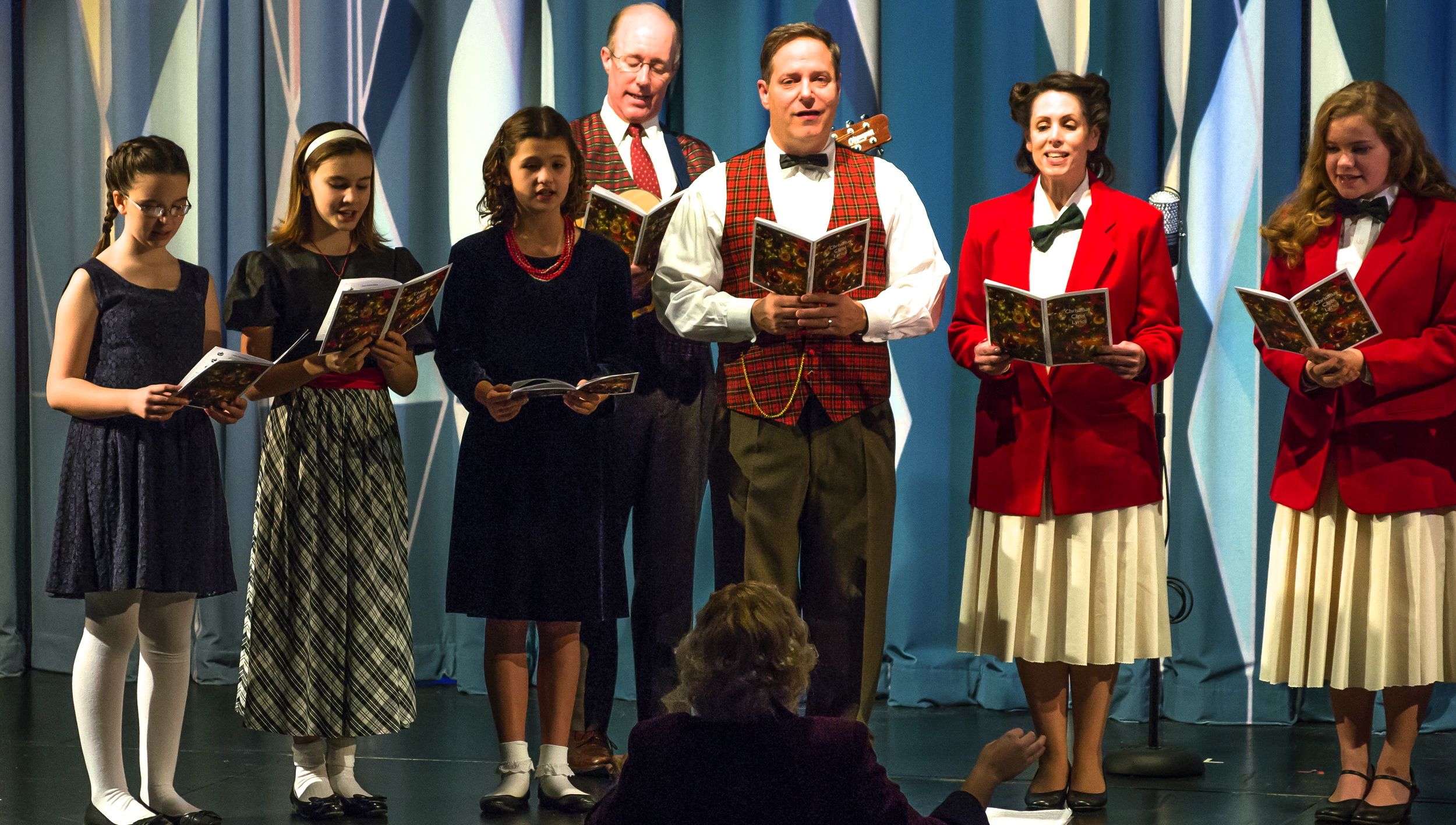 The Cary Players succeed once again in bringing this chestnut to life with a capable cast, wonderful set, charming costumes and the addition this year of carolers and jingle singers. Director Debra Grannan has done an excellent job casting the play and pulling all these kids together who make up a large supporting cast, many of whom have never acted on stage. 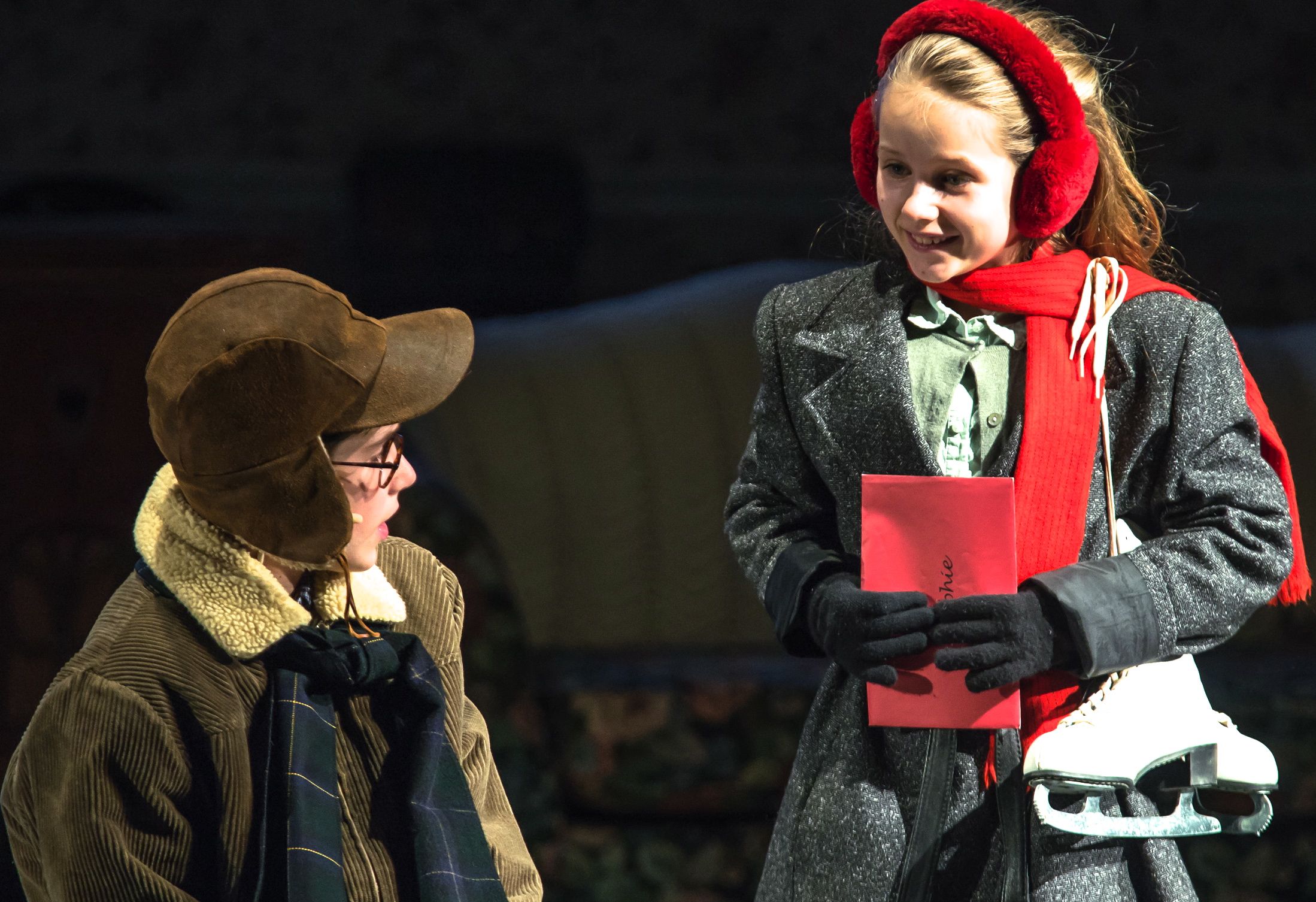 What audiences may forget is that the story is about love – family love for each other, friendship love, and the budding of love between young boys and girls in grade school as they nervously explore their feelings.

The part of grown-up Ralph, played by veteran Cary Players cast member Dan Martschenko, narrates the action in a wonderfully self-deprecating way. He truly carries the show as he is on stage the full length of the play. He wistfully remembers his youth, not only of that Christmas, but his discovery of how he deeply cares for his parents, his friends and his brother, even when they can all be extremely annoying.

The part of Ralphie, played by Greg Larkins, reminds me a bit of Macaulay Culkin in his wide-eyed innocence. Tracy Fulghum reprises his excellent cameo role as the embodiment of Red Ryder the Texas Ranger , the inspiration for the BB gun. He lives large in Ralphie’s mind.

Ralphie’s parents never really know what’s going on with their kids or each other, much like most families. His  sympathetic Mother, played by Heather Shinpaugh, can best be described as hovering over the youngest, correcting the dad, all the while keeping the home fires burning with plenty of meat loaf and red cabbage. The Old Man is played by Stanley Amditis, who swears a blue streak of invectives that are sure to bring a smile as he fights the car, the furnace and the nature of unfair mail order contests. 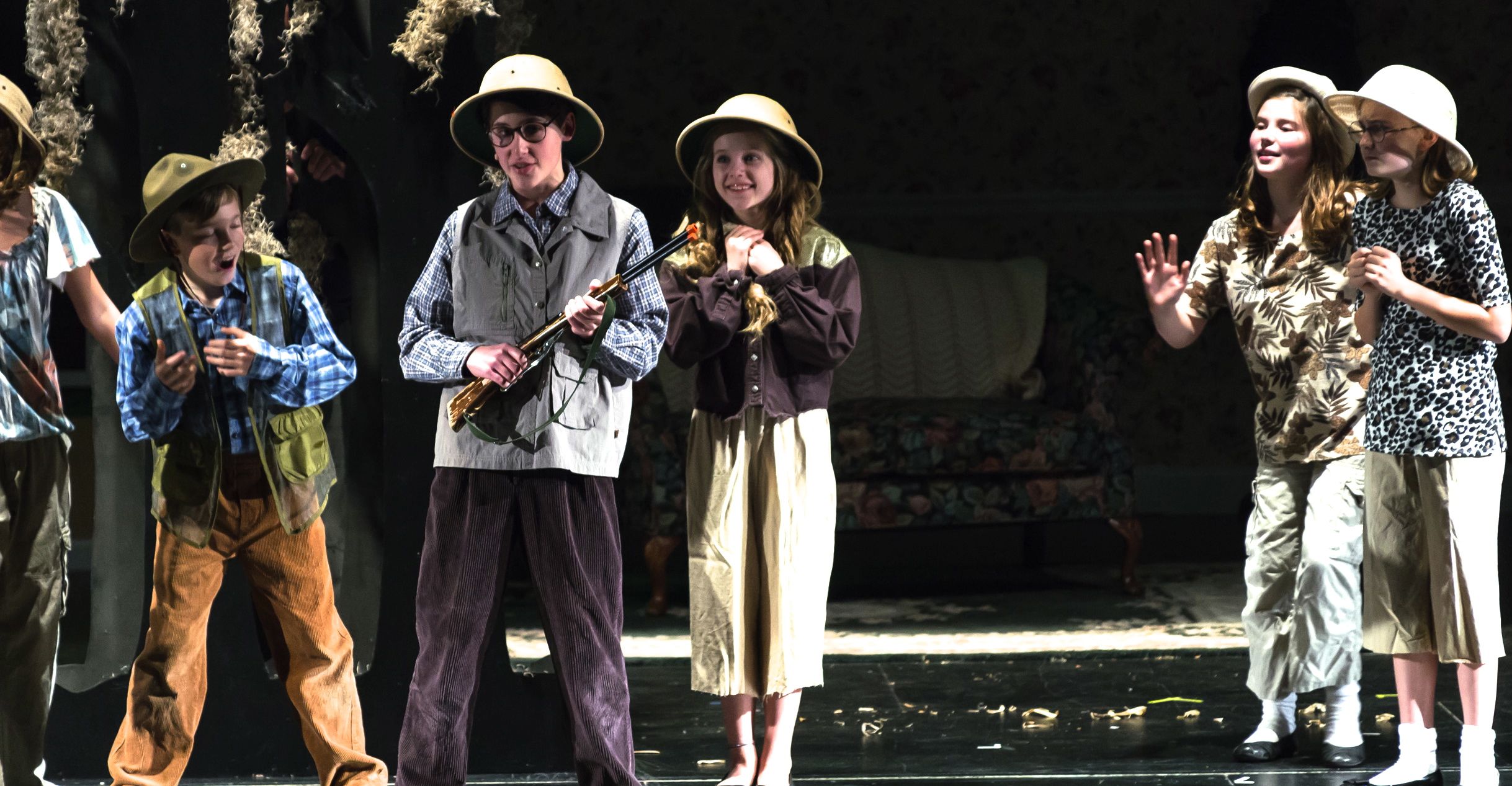 The play also throws in a fair amount of fantasy. These are scenes that play out in the mind of Ralphie as he works out how to convince his parents of his dream gift. These include being blinded by the BB gun to spite his parents’ warnings,  having a shoot-out with his arch rival bully Scut Farkas,  hunting in the jungles and protecting his friends,  and having a fireside chat with the real Red Ryder.  I liked these scenes the best, in their complete departure from reality. The production team subtly switches the stage around before your eyes to create forest scenes,campfires and Christmas Tree lots. That’s just wonderful – kudos to the entire Production Team!

Our family makes it a habit to kick off our Holiday season by visiting the Ole Time Winter Festival the first Saturday of December in Downtown Cary. Then we attend the Tree Lighting at Town Hall, followed by taking in a Christmas performance by the Cary Players. That’s our Holiday Tradition. What’s Yours?