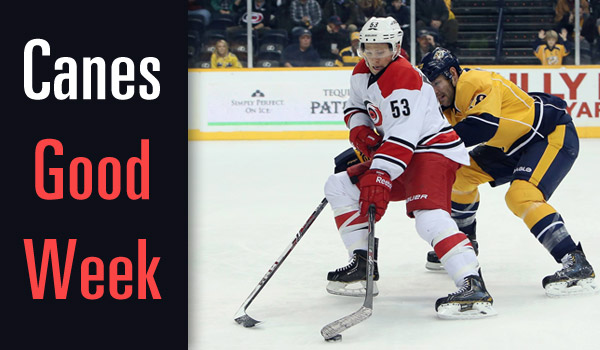 Raleigh, NC — The Carolina Hurricanes found their scoring touch, found success on the power play and found their legs as they won all three games this past week against some strong competition.

Hurricanes Solid Over the Capitals

The Hurricanes beat the Washington Capitals 4-1 in an important game.  A loss would have put them in a big hole regarding the standings, extended their losing streak and doing who knows what to their self confidence.

After making a quiet play defensively, Jeff Skinner opened the scoring about mid way in the first period.  Eric Staal stole the puck behind the Caps goal then passed out to Skinner just above the goal line.  With no angle on his forehand, Skinner made a snipper’s shot that somehow found its way between the pads and post.

In the second, Jay Harrison had a home run pass to Skinner, camped out on the Caps’ blue line.  Skinner caught the pass then took a few strides before letting go a bullet that went short side to give the Canes a 2-0 lead.

A few minutes later with the Canes on a powerplay, after a pass from EStaal, Skinner passed out to Andrej Sekera.  With heavy traffic in front of the net, Sekera’s slapshot  had eyes and found the back of the net.

The Canes had all the momentum, were faster on the puck and were aggressive to the net.  Manny Malhotra and Juri Tlusty were cycling the puck behind the Caps’ net, Tlusty sent the puck to Harrison on the point.  Harrison shot into traffic with the puck bouncing off Radek Dvorak.  Tlusty was going through the high crease and put in a back hander from about 15’ out giving the Canes their first 4-0 lead of the season.

Justin Peter’s shutout was killed when Canes killer, Mike Greene, scored on a powerplay for his first goal of the season. Strong 4-1 win for the Canes.

Two nights later the Canes played in Nashville where the Canes are better on paper and needed to be better on the ice.

Just 23 seconds into the game, Eric Staal won a battle down low sending the puck along the boards. Justin Faulk came down and sent a wrister to the far side the seemed to surprise Marek Mazanec for a very early 1-0 Cane lead.

Just 50 seconds into the second Carrie Underwood’s hubby, Mike Fisher scored on a tipin off a slapshot from the left point. About 2 minutes later, the Preds scored again for a 2-1 lead but the Canes were just getting started.

Jeff Skinner came down fast on the right wing with Tuomo Ruutu in the center.  Skinner carried the puck over the blue line unchallenged.  Having found his scoring touch, Skins sent a wrist shot short side to tie the game at 2 apiece.   Just after a Cane penalty, Patrick Dwyer made a perfect cross ice pass to Riley Nash who sent in a one timer.  Late in the period, Skinner scored his second of the night on a powerplay.

With just over 2 minutes to play, Skinner completed his first career hat trick with an empty netter to give the Canes their first 5 goal game of the season.

The big win of the week was Friday against a very strong San Jose Sharks’ team.  They’re big, fast, gritty and are a scoring machine.  The Sharks came out strong and by the end of the first had a 2-0 lead.  The Canes went stride for stride in what amounted to a tight checking game for two periods.

Jay Harrison scored the lone goal in the second on a snap shot after a pass from the well traveled Zach Boychuk who was called up for the one game earlier in the day.

Early in the third, Riley Nash scored his second in as many games on a tip in off a Jay Harrison shot.  About 2 minutes later, the second line of Elias Lindholm, Jordan Staal and Nathan Gerbe were cycling the puck deep in the Sharks end.  From the half boards, Lindholm passed down to Gerbe who sent a hard backhander 2 feet out in front of the net to JStaal.  Staal tipped the puck to the net, kept jamming after the keeper could cover the puck and got the puck in for a 3-2 Cane lead.

That lead was short lived as Justin Braun sent a slapshot from the blue line that Cam Ward would want back.  With about 6 minutes to go, with JStaal yelling to Sekera to go for the shot, Sekera skated along the blue line then let fly a good hard shot.  Lindholm, who had a great game, was in the dirty are of the crease and did a calculated tip in that sent the partisan crowd in a frenzy.

With the Sharks having 6 attackers, EStaal stole the puck at his own blue line, skated to the center red line then sent the game sealer into the empty net for a solid 5-3 win.

Great week: 14 goals in 3 games, Skinner’s first Hat Trick, 6 points, and back in a playoff position.

Theater: A Christmas Story Full of Love and Fantasy