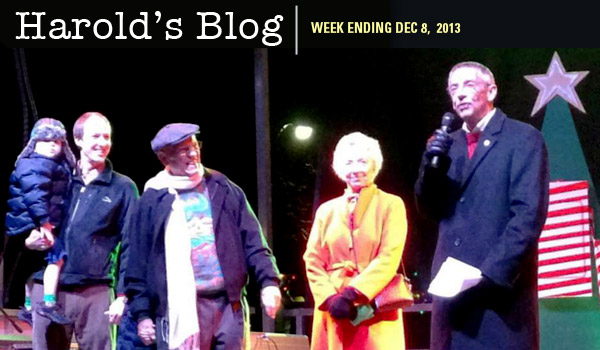 Cary, NC — This week was busy despite a few cancelled meetings.

Monday and Tuesday I was supposed to join the town manager and talk with three advisory boards about the new town staff organizational structure. This was postponed until a later date. As a result I was able to have dinner with my family.

We talked about past accidents in the area and options for making it safer. Both parties agreed to do all we can to work toward a solution but since it is a NCDOT road we will be limited.

There are also regulations that come into play. For example, a traffic light is not allowed because of state and federal regulations. Our staff meets with NCDOT representatives once a month and met with them on Friday, December 6 to talk about this issue. They will continue to look for alternatives to propose to NCDOT to make this area safer for pedestrians.

The principal is looking to make proposals to the school board to fund cross guards and other initiatives.

Later Tuesday I met with the town manager and staff to discuss new information related to a large economic development opportunity. Cary continues to be an attractive place to relocate a business and that is helping with our recruiting efforts for this business.

My final meeting Tuesday was with the town manager and the assistant to the town manager as we discussed issues related to the Chamber of Commerce and their efforts to hire a replacement for the Vice President of Economic Development. Cary has been blessed with the work of Sandy Jordan who is retiring.

Wednesday I was joined by council member Robinson, the town manager, staff members, chamber members, and others in a meeting of the Economic Development Committee. There were several interesting points presented in the meeting that included:

The Economic Development meeting concluded after about 45 minutes.

Later Wednesday I gave remarks at a reception held for the 2013 College Cup. In attendance were representatives from Campbell University, which is the host college, Greater Raleigh Sports Alliance, Capital Area Soccer League, NCAA Division I Soccer Committee members, chamber members, business leaders, and members from town staff. In my remarks I pointed out that Cary is hosting the College Cup for the 9th time, that we have bids in to host for the next four years, and that it is a very high priority to host the College Cup now and in the future.

Saturday morning I gave remarks at the 10th annual Old Time Winter Festival in downtown. There were plenty of vendors on hand and all Cary downtown businesses were open. The downtown revitalization effort is gaining momentum with a dozen eateries off Academy and Chatham Street. I predict this festival will continue to grow in the coming years.

Saturday evening it was my pleasure to give remarks at the 26th annual Cary Christmas Tree lighting. This year we were honored to have Ralph and Daphne Ashworth as the tree lighters. They have shown their love for Cary for over a half a century since moving here in 1957. Before the tree lighting we were blessed with great entertainment especially from Cary High School and Cary Elementary. There was a good crowd in attendance (I am guessing about two hundred) despite the cold temperatures and they helped me countdown the lighting of the tree. Everyone seemed to have a wonderful time.

In emails this week there was a response by the town attorney to the false accusations from a group who call themselves the CaryWatch. Unfortunately, this group has advocated for such things as shutting down our sports venues and accused the town of spying on customer water usage with the automated meters which is absurd. It is unfortunate that their mission seems to be to confuse Cary citizens by spreading half-truths and misinformation. Their latest accusations are about the Mayton Inn. Here is the town attorney’s response to the CaryWatch concerns and recitals:

If this group wants to be productive and help the town and it should focus on the facts and the truth. To date this group has caused Cary taxpayers tens of thousands of dollars to research and respond to their false claims and accusations.

In emails this week there was a complaint about Cary’s “excessive growth” (we are growing by less than 1%), a request for public Wi-Fi, and concerns about Walnut Street median proposals.

This week will be a busy week with events and meetings. The highlights include the annual Jaycees Christmas parade, and a council meeting full of quasi-judicial hearings.

Well that is all for this week. My next post will be on Sunday December 15th. Although I have Facebook and Twitter accounts those are not the best means of communications with me. Please send all Town of Cary questions or comments to Harold.Weinbrecht@townofcary.org and email personal comments to augustanat@mindspring.com.