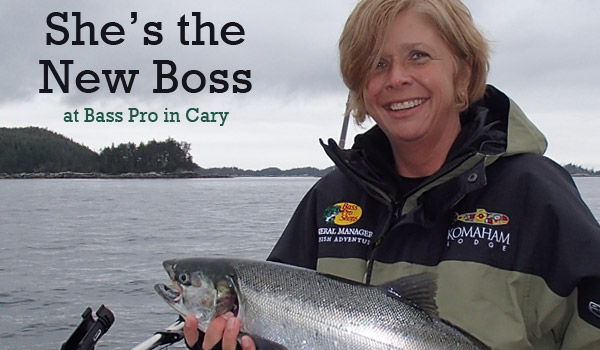 From Bass Pro via email:

As the newly named general manager of North Carolina’s newest Bass Pro Shops store in Cary, Anita Bumgarner likes only one thing better than basketball — and that’s the outdoors.

“I’m a huge college basketball fan,” said Bumgarner, “but the outdoors is my passion.” Lucky for her, North Carolina has plenty of both.

The Bass Pro Shops Sportsman’s Center opens in February in Cary and Bumgarner believes the store and the state were made for each other.  North Carolina fishing, hunting and other outdoor activities are really popular among residents as well as those visiting the Tar Heel State.

“North Carolina has nearly 2 million hunters and anglers — in fact, the state ranks number seven in the United States for fishing,” said Bumgarner. “Being able to manage the store that will provide customers with the gear, knowledge and ability to go out and enjoy our great state is a treat for me,” she said.

Born in North Wilkesboro, Bumgarner is a graduate of Western Carolina University.  She managed a Home Depot store for more than 10 years prior to joining Bass Pro Shops in October 2010 as the general manager of the store located in Denham Springs, La.

Bass Pro is well known for their outdoor education programs. Anita had some advice for Cary outdoor enthusiasts. “Whether they are just beginning in the outdoors or want to learn some new and different skills, they can come to our store and attend free workshops such as beginning fishing, setting up a campsite, Dutch oven cooking, nature photography, fly fishing, hunter education classes and more,” said Bumgarner.

Anita Bumgarner will lead a staff of 200+ at the new Bass Pro Shops location in Cary.

Triumph of the Tuba Section