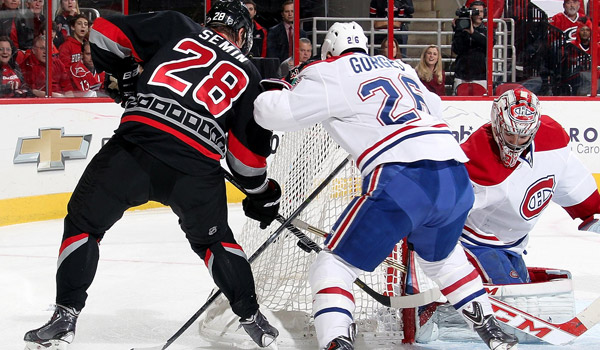 Raleigh, NC — The Carolina Hurricanes had one of their best and most memorable comebacks in team history when they beat the Montreal Canadiens, 5-4 in overtime December 31 at the PNC Arena.

The Canes just flat out didn’t show up for the first 2 periods.  No excuses, they were, man for man, a stride slower that the Habs on every play.

Earlier in the day the Canes traded Kevin Westgarth to Vancouver.  While they’re all professionals, trades do affect the players.  Westgarth didn’t play much but was well liked by the entire team and fans.  On top of that, Jim Rutherford made public comments there were players not playing to their potential and changes would be made.

Very early in the first, the Canes had 3 players behind their own net leaving Lars Eller all alone in front of Ward for the easy backhander.  With Justin Faulk in the box for a weak slashing call, the Habs had good passing on their powerplay and got a deflection past Ward for a 2-0 lead.

Ward was not at fault on this goal and after the first goal was playing well making key saves as the Habs were being selective on their shots going for quality over quantity.

Montreal’s third goal was purely a Canes defensive breakdown.  The Canes lost a faceoff to the right of Ward.  P.K. Subban went around Faulk and made a pass out front to Max Pacioretty who made the one timer look too easy with a Canes defender late on clearing the crease.

The Canes came out with an attitude in the third.

Very early with the puck deep in the Habs end, Jeff Skinner picked up the puck to the left of the goal.  With nothing to shoot at, Skinner carried the puck behind the net around to the right side.  Just as he was about to pass, the puck trickled off the toe of his stick but Skinner was able  to regain control. He then turned for a forehand shot and sent one high far side off the pipe into the net giving the Canes life.

Less than a minute later Skinner took a pass from Andrej Sekera from the point. Skinner corralled the puck in the left faceoff circle, took one stride then sent one in high glove side to wake up those who fell asleep after the first two periods.

Just about 2 minutes later, Skinner had the puck behind the net and tried to pass out to Alex Semin.  The puck hit the back of the Hab defenseman and bounced in the crease area.  Eric Staal was charging the net and did what he does best and put the puck in the net then showed the excitement of the team and crowd.

About 4 minutes later, Zach Boychuk made a beautiful pass from behind the net to Manny Maholtra whose one timer put the Canes up 4-3 and sent the crowd into a frenzy.   Subban tied it up 2 minutes later ruining a regulation comeback for the Canes sending the game into overtime.

In overtime, EStaal passed the puck from behind the net to Ron Hainsey on the point.  Hainsey found Semin in the crease who backed up, turned around and sent a laser that fooled not only Carey Price but the nearly sellout crowd for one of the most memorable comebacks in Canes history.