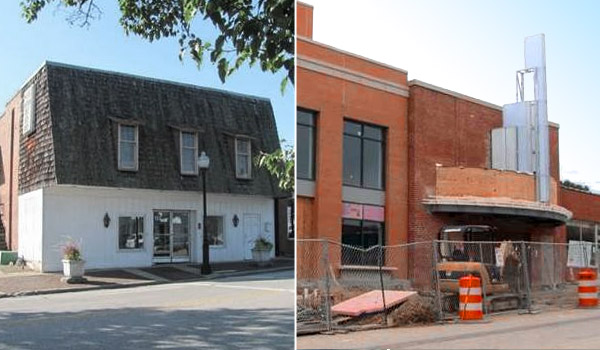 Cary, NC – Sixty years ago, three iconic structures represented a past, present and future of the small town of Cary.

The glory days of the Page Walker Hotel had given way to service as a residence for the Williams family. Cary High School, led by principal Paul W. Cooper basked in its academic and athletic accomplishments. And on Chatham Street, a youthful movie house named The Cary entertained residents with the novelty of first run films, Saturday matinees, and live entertainment.

But times changed. All three buildings slipped into lesser roles as the years mounted. Cary High School relocated farther down Walnut Street, the Page Walker lapsed into decay, and The Cary, closed in the late 1950s, marked time as a retail outlet first for clothing and then for auto parts, even becoming unrecognizable from its former role.

And times changed again. The Page-Walker was lovingly restored in the 1980s. Two decades later Cary Arts Center emerged from a grand renovation of the school. And in 2012 The Cary was rescued from obscurity through purchase by the Town of Cary.

In March 2014, all three buildings will be united under the Town of Cary Parks, Recreation and Cultural Resources as historic treasures with modern cultural arts amenities. The Cary will be unveiled after an expansion and renovation that respects the building’s role and origins, just as happened with the Page-Walker and Cary Arts Center.

The Cary also takes its place as a performance venue midway between the intimate space at the Page Walker gallery and the grand auditorium at Cary Arts Center. And with 15,825 gross square feet, The Cary offers capabilities well beyond the original. 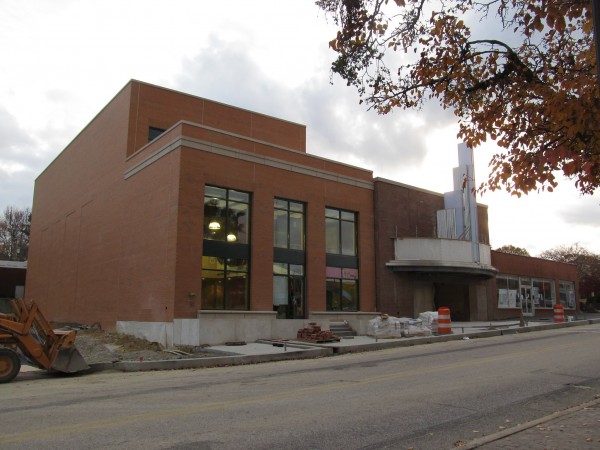 The iconic feature of the new facility is a dazzling Art Deco-style marquee with a vertical blade that evokes the heyday of mid-20th was designed by artists Lynn Basa and Matt McConnell. Beneath it is a sweeping terrazo terrace that echoes the marquee structure.

The visitor enters a skillfully crafted lobby anchored by a curved wooden ticket sales counter. The lobby is warmed by comfortable wall seating and decorative Art Deco touches. To its left, within a new three story expansion building is a concession area that will showcase artistic elements saved from the older theater (original doors and seats) as well as photographs by Marshall Clayton of similar marquees of the Southeast. A curved staircase sweeps upwards to a second story balcony.

The concession area offers café seating both inside and on an exterior terrace in front of the building. Concessions will be offered for sale during performances.

What We Can Expect in The Theater

The theater hall has not just been restored but enhanced, and has a surprisingly large feel. There are a total of 179 seats (40% more than in the original), mostly tiered, some of which are removable for cabaret seating. The deep stage is designed to accommodate a variety of uses including comedy, amateur theater, live music, and community rentals. The facility incorporates modern energy efficient lighting and sound equipment.

While The Cary is designed for multiple uses, films feature prominently in the performance plan. Facility Supervisor Joy Ennis says that she is looking to run documentaries, independent films, Hollywood classics, and even Bollywood favorites. Films will run Thursday evenings, Sunday afternoons, and alternate Friday nights. Children will enjoy kid-friendly movies one Saturday a month.

The remainder of the expansion space will house supporting functions including dressing rooms, staff offices, food service, maintenance, and upper floor space that can be leased for business use. In addition, meeting space is available in the upper lobby of the older building.

Nearly seventy years after it first came to life, The Cary has re-emerged as another community treasure along with its Page Walker and Cary Arts Center sisters, ready to serve and delight new generations of Cary citizens.

This story was written by David Lindquist,

CaryCitizen is sponsored in part by Hopewell Academy in Cary, serving grades 5 – 12.