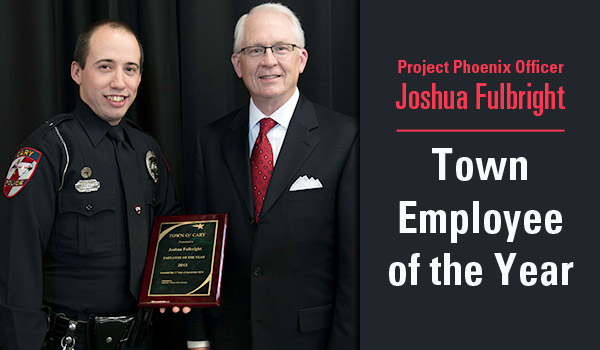 Cary, NC – The Town of Cary recently named Officer Joshua Fulbright their Town Employee of the Year for his work with the Project Phoenix.

Master Police Officer Joshua Fulbright, 27, is a member of the Town of Cary’s Project Phoenix (Promoting Healthy Occupancy through Education, Networking and Information Exchange). He has been employed by the Town for over five years and a member of Project Phoenix for nearly two years. Fulbright was chosen out of 20 nominees from the Town’s 1,145 employees.

As Employee of the Year, he received a plaque and $500, and was recognized by the Cary Town Council at their December 19 Town Council meeting.

“Josh consistently goes above and beyond to become an expert in his assigned community, understanding an area’s needs, issues and concerns,” said Police Chief Pat Bazemore. “Like so many of our other officers, his passion and dedication to making a difference in the community is what keeps Cary such a safe place to live, work and raise a family.”

In an Employee of the Year rarity, Fulbright was nominated by every person in his immediate team. His nomination submission named Fulbright as an integral part of the growth of Project PHOENIX. In 2013, Fulbright received numerous compliments from community members speaking highly of his work ethic, energy and follow through. Members of Project PHOENIX described Fulbright as an active and engaged partner within his communities with a keen ability to develop effective problem solving solutions.

“We’re very proud of Josh’s exceptional customer service skills and strong work ethic,” said Ben Shivar, Town Manager. “As we strive to maintain high levels of service, I congratulate Josh as well as all of this year’s nominees who represent the type of exemplary employees we aim to attract and retain in the Town of Cary.”

20 Town Employees were nominated for the honor that Fulbright received, they were:

Story and picture from Town of Cary.

The Cary Theatre, a Revived Community Treasure
Scroll to top