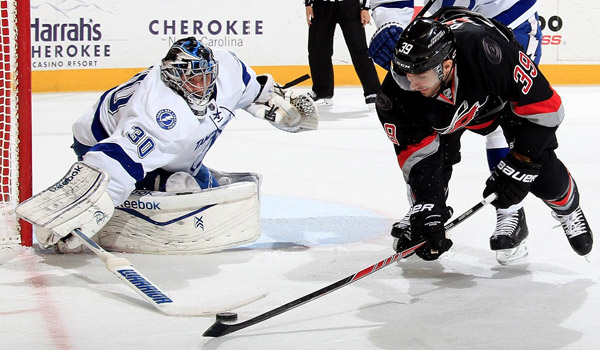 Raleigh, NC — After having been shut out in back to back games, the Carolina Hurricanes ended their scoring drought with a much needed win over the Florida Panthers. The following night, the Canes came out flat, gave up 3 early goals and eventually lost 5-3 against the Tampa Bay Lightning.

Riley Nash ended nearly 146 minutes of what will hopefully be the longest scoring drought of the season when he swiped in a rebound.

Radek Dvorak made a great play at the blue line when he knocked down a defensive clear by the Panthers out of mid air.  Dvorak took a few strides then sent a hard slap shot forcing Tim Thomas to make a pad save. Nash crashed the net and put in a back hander to give the Canes a 1-0 lead.

Early in the second, Eric Staal won a faceoff back to Alexander Semin.  Semin went right then sent a wicked wrister high glove side that gave the Canes a 2-1 lead.

A few minutes later Dvorak got called for an errant high stick for a 4 minute penalty.  Semin blocked a pass at his blue line with the puck going to EStaal.  Staal saw Semin start up ice and sent a perfect pass to the neutral zone.  Semin went in on Thomas, deeked twice then stuffed one in for a solid 3-1 lead.

The Panthers scored again late in the third but the Canes and goalie Anton Khudobin held them off for the 3-2 win.

The surging Tampa Bay Lightning were in town the next day for a 5 P. M. game.  It was also a Family Night game which is one of the best deals around plus all kids under 16 get to take a shot on the ice after the game.

The Bolts were missing their best offensive and best defensive players but still managed a 5-3 win.  Coaches will say practices and warm-ups can tell a lot about a team.  I make it a point to watch all warm-ups and the Canes just didn’t have ‘the jump’.

Turns out during the first 10 minutes of the game they were as flat as they’ve been all season and spotted the Bolts to an early 3-0 lead and a quick exit for Cane goalie Justin Peters.  Peters had not played since December and it was more that he was left out to dry than being rusty. Coach Kirk Muller did make the right move by changing keepers just to send a message to the rest of the team.

The Bolts did score another goal early in the second but Alex Semin got the Canes on the board with an end to end rush then sending a snap wrister in the 4” space not covered by 6’7” Ben Bishop in goal.

On their next shift, EStaal muscled the puck away from Jean-Philippe Cote in the neutral zone, did a 180 then went strong to the net sending a slap shot five hole to give the Canes life and cut the lead 4-2.

In the third period, Juri Tlusty sent a nice centering pass to John Michael Liles rushing in the high slot.  Liles took the slap shot, Bishop made the save but Ron Hainsey was there to put in the rebound to end the games’ scoring.

If the Canes played 60 minutes like they did the last 10, no question the game would have had a different outcome.

Snow Tonight in the Triangle