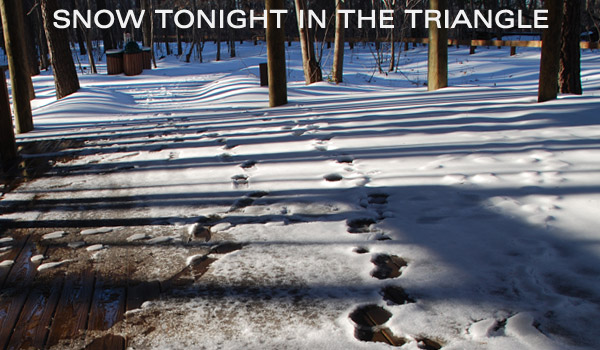 Cary, NC — Pay heed, Triangle residents, because snow is predicted for this evening across the Piedmont and things could get messy.

Snow Tonight in the Triangle

It’s been a tough winter across the northern tier of the U.S.. with arctic air repeatedly pushing down from Canada. Earlier this month, we had a two hour school delay as a blast of cold air called a Polar Vortex caused temps to plunge in the Triangle. But we’ve repeatedly escaped the snow that has blanketed the Mid-Atlantic this winter.

Not so lucky tonight.

As cold air sweeps in this afternoon, rain will commence along with falling temperatures. By 6 PM, the rain is expected to change over to snow as the chill air blows through.

Accumulations may reach an inch of the white stuff, with precipitation ending after midnight.

Things could get hazardous for commuters tonight as the rain changes over to snow. As the evening progresses, driving conditions could deteriorate.

Get home early if you can tonight.

Tomorrow’s weather is predicted to be sunny and very cold.