Cary, NC — Representative Paul Stam of Apex, who is also Speaker Pro Tem of the NC House, sent us the following opinion about the N.C. Education Lottery. We thought it was worth reprinting here. What do you think?

The North Carolina Lottery Commission announced on Tuesday, January 28, 2014, record breaking lottery sales: such sales contribute to State education funding. However, the release provides no context. This continues the lottery commission’s attempt to burnish its image despite the facts.

An example of such an attempt is the commission’s October 2013 newsletter. The headline boasts of the significant impact the NCLC has on education funding in North Carolina. This is a gross exaggeration. 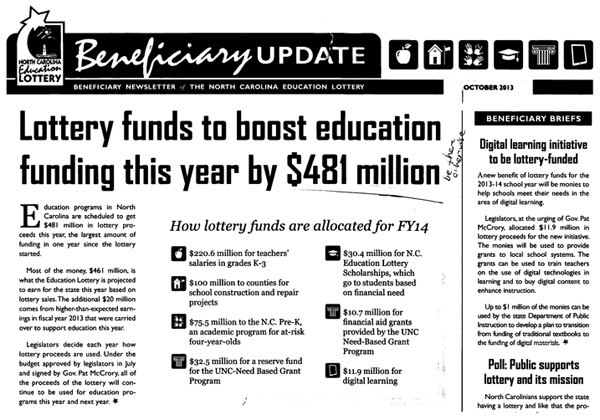 The headline of the newsletter states, “Lottery funds to boost education funding this year by $481 million”. This statement is deceptive on two grounds.

First, some of the money the NCLC provides for the Education Budget (as well as the Health and Human Services budget for NC Pre-K) for FY 2013-14, which is roughly $481 million, would be appropriated if the NCLC were not in place. State residents, without the NCLC, would spend their money on goods and services in which their transactions would be subject to the state and local sales tax of 6.75%.

Not only would the additional sales tax revenue supplant part of the current revenue from the lottery, but the money saved or spent on useful goods and services would also reduce crime rates and the level of welfare spending.

Jean Valjean would not have stolen that loaf of bread in Les Misérables to feed his family if he had not lost all of his money (perhaps by playing the French lottery)?

Lottery Contribution to Education: Not Significant

Second, the amount the NCLC allocates to the overall education budget is not significant when considered in context.

Below you will find a table illustrating the Education budget for FY 2013-14 broken into its various components with lottery funds equaling 4.20 percent of the overall education budget. But lottery proceeds accounted for only 2.34 percent of the General Fund budget ($20,630,767,645) and only 0.96 percent of overall State spending ($50 billion which includes federal government pass-throughs).

While proceeds from the lottery make up very little of the overall budget, the hype created by the NCLC causes voters to disregard or vote against local education bond issues because they think that their financial contributions through the lottery have alleviated the need for real education spending. 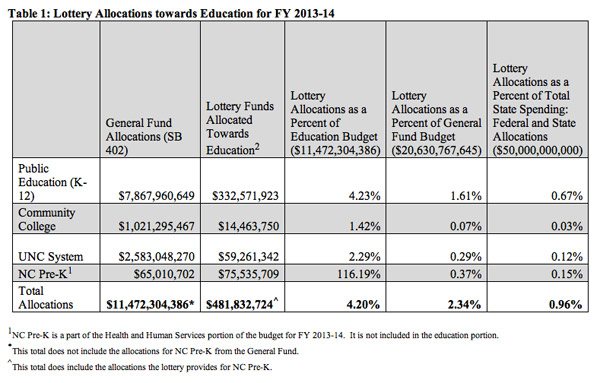 On the next to last page of the lottery newsletter is an article about a N.C. State student who received a scholarship from the NCLC. The article does not disclose the amount of the student’s scholarship, but it does include information about the great things the student is doing as well as the number of scholarships the NCLC has given to students.

The title for the article states, “Scholarship student at N.C. State aims to help veterans.” The student appears to be a well-rounded and academically gifted student, but the NCLC is using her (and veterans!) to improve its public image so as to encourage us to play the lottery. 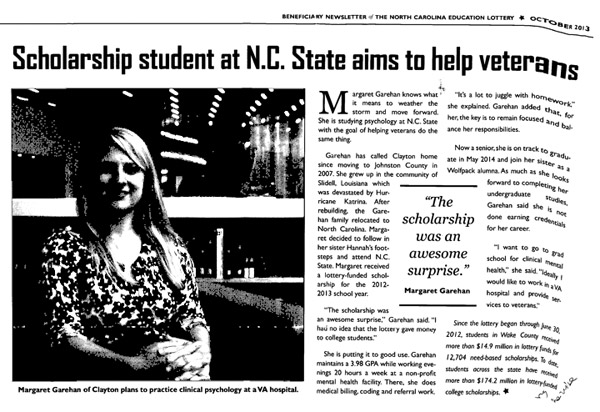 For the 2013 fall semester, the SEAA (State Education Assistance Authority) reported that the average lottery scholarship was $803.

To put this in context, in-state tuition at N.C. State for the same academic year was $8,055.15. However, the most important fact is that for the average full-time North Carolina resident enrolled at a UNC system school for FY 2012-13, the State of North Carolina spent $13,000 in public funds. And for this student at N.C. State, the tuition subsidy from the taxpayer is $15,918.

In sum, all full-time North Carolina students at N.C. State receive a subsidy from the State nineteen times over the average scholarship the NCLC has to offer.

Despite this the NCLC only promotes the scholarships it offers to students as a way to increase its public image and continue the myth that it supports education.