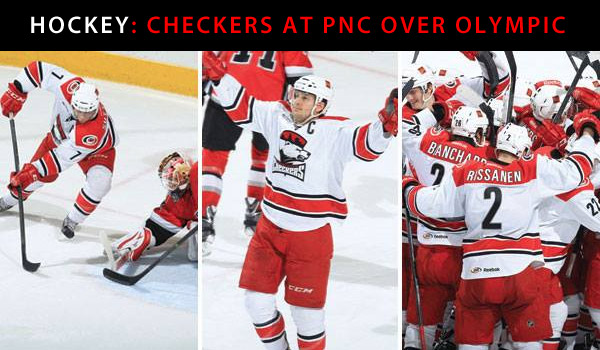 Raleigh, NC –The Charlotte Checkers played 2 games at the PNC Arena while the Canes and the NHL are off for the Olympic break.  Both games were against the Abbotsford (British Columbia, Canada) Heat, losing the first 5-1, then, after being down 4-1 in the first period, won 5-4 in overtime.

The first game was all Abbotsford as they controlled the puck for most of the first 2 periods, going up 3-1 by the mid point of the game.

The Heat have many talented skaters and stick handlers and overall are a very big team with only 5 players under 6 feet tall. The game got very physical, with several fights the Checkers probably needed to generate a spark.

The Heat had a 19 hour bus ride from Chicago, got into Raleigh at 4:00 am and didn’t have any pregame skate so the Checkers certainly should have had the early advantage.  The Heat are a very strong team and are on top of the Western division with the Checkers near the bottom.

Second Time is a Charm

The second game was almost 2 games in one.  The Heat’s first penetration into the Checkers’ end resulted in one shot and one goal within the first minute of the game.  The Checkers could have folded but came back a minute later and scored on their first shot. Game on!

The Heat then took advantage of every Checker mistake; missed defensive coverage, sweet rebound and lack of checking to go up 4-1 by the end of the first.

In the second, the Checkers came out with an edge.  After a save by Checker goalie Mike Murphy, the eventual shoving and quite possibly words started.  Matching penalties were called but it was also a notice the Checkers weren’t going down without a fight.

Ryan Murphy, down with the Checkers to get more playing time, was a force on the ice and no doubt was one of the best skaters.  He started a rush from his own end up into the Heat’s zone, passing off to Justin Shugg who made a pretty drop pass to Chris Terry in the high slot.  Terry send a hard slap shot right off the chest of the Heat goalie.  As all coaches preach in most sports to follow your shot, Terry snatched up the rebound and sent one high glove side to cut the deficit in half.

The Checkers won the faceoff after the goal and brought the puck into the Heat end.  This was payback time as Terry passed to Shugg who had a quick shot that went in high stick side to bring the Checkers within one.

The game’s first powerplay went to the Checkers early in the 3rd period.  Ryan Murphy passed over to Terry on the right point. Hockey smarts are in Brett and Brody Sutter’s DNA. Brett was creating traffic in front of the crease allowing Terry’s slap shot to go in to tie the game at 4-all.  The balance of regulation was tight checking and smart play.

With how the game started, especially after their first game of the weekend, discipline and leadership credit have to be given to both coaches.

Overtime was short and sweet. The Checkers sent the puck deep on a dump and chase and were relentless behind the net. Brett Sutter won a physical battle then came out in front of the net and sent one in to complete a great comeback against a strong team.