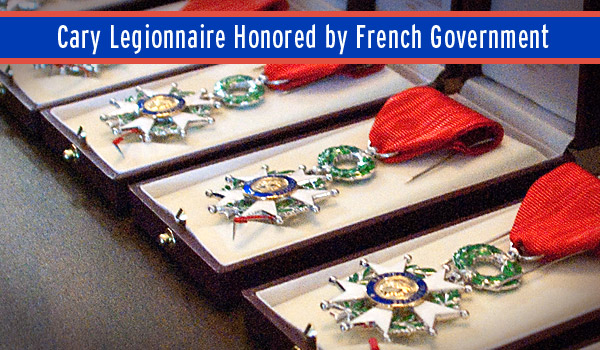 Cary, NC – On February 20th, 2014, The French government will honor 14 WWII veterans from Eastern North Carolina by inducting them into the National Order of the Legion of Honor.

Legionnaire James Samsom from Cary American Legion Post 67 will be in that honorable group. The ceremony will take place at the State Capital at One Edenton Street, at 1:30 pm and will be held in the House Chambers.

In late 1942, Jim joined the 60th Medical Battalion at Camp Butner, NC, to train as a medic, and a year later shipped out to England in preparation for D-Day. On D+5 Jim’s crew drove an ambulance across Omaha Beach where casualties were heavy, and set up field hospitals to treat wounded soldiers. Jim was assigned to various aid stations as troops moved from France through Belgium into Luxembourg.

During his tour of duty in Europe Jim served in four major offensives: Invasion at Normandy, Battle of the Bulge in the Ardennes Forest, Battle for Saint Lo, and the campaign surging toward Berlin. Jim was awarded the Bronze Battle Star for service in the vicinity of Frankfurt au Main.

On November 1, 1944 Jim was transferred to the Army’s 28th Infantry Division which was trying to hold a 25-mile sector in Luxembourg. On December 17, 1944, Jim and his squad were captured at Hosingen and, because of his medical training, he was forced to work in German field hospitals until he was taken to Stalag IXB, aka Bad Orb, in late January 1945.

He was later transferred to Stalag XIIA in Limburg where he was held until liberated on April 15, 1945. He returned to the U.S. in mid-May and married his waiting sweetheart, Mozelle Langston, who he’d met while training at Camp Butner in 1942.

Among Jim’s medals and awards:

After his honorable discharge from the U.S. Army in the Fall of 1945, Jim decided to make a profession of his enjoyment and skill in printing. He finished his term of apprenticeship in 1946 then worked as a journeyman in the print shop at NC State University.

From 1964 until he retired in 1989, Jim was employed by the Raleigh News and Observer where, for 25 years, he prepared pages for press.

“The Cary” Opens This Weekend