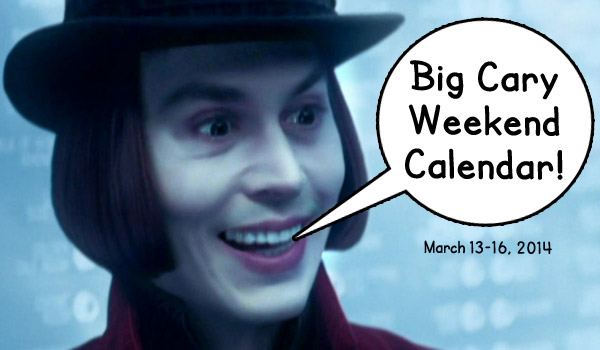 Cary, NC — The Southern sun seems to have finally vanquished the Polar Vortex, with warm air and plenty to do this weekend in Cary.

We’re always willing to consider Thursday as part of the weekend, especially when something interesting is on the Calendar.

Nikon School – This three hour workshop, presented by Nikon in Cary, at Embassy Suites promises to “simplify your picture taking, while making it a fun and exciting experience. Most importantly, you will get photo tricks and insider tips for taking better photos in your everyday life, on special occasions, or at family sporting events.” Instructor is Tamara Lackey, a talented and successful photographer from Durham. 6:30pm – 9:30pm. More info on the Calendar.

Town Hall Meeting with Tony Tata – The Town of Morrisville will hold a town hall meeting featuring North Carolina Department of Transportation (NCDOT) Secretary Tony Tata . Secretary Tata will discuss NCDOT’s big picture initiatives, followed by an update on local projects by Wally Bowman, NCDOT’s Division 5 Engineer. There will be time for questions and answers from the audience. The event is targeted specifically to Morrisville residents, but is open to the public. MSV Fire Station #1 6:30-9:30 PM.

All weekend, The Cary High School Performing Arts Department will be presenting Willy Wonka & the Chocolate Factory March 13th-15th @ 7PM. Tickets are $8 for Students and $10 for Adults. Starting March 1st, ticket reservations can be made by ordering online at caryhsperformingarts.com. Tickets can also be purchased at the door each night, however, reservations are recommended. The Box Office will open @ 6:30PM on each night of the performance.

Tobacco Road Marathon – Sunday, March 16, 2014, starts at 7 AM. The half marathon is sold out, but a few spaces may be left for the full. http://www.tobaccoroadmarathon.com/

The weekend at The Cary, downtown on E. Chatham Street:

The crocuses are blooming and the daffodils can’t be far behind. It’s a great time to get out of the house and shake off those winter blues.

The Calendar of Events is edited by Lindsey Chester.

Events coverage is sponsored in part by Concert Singers of Cary.