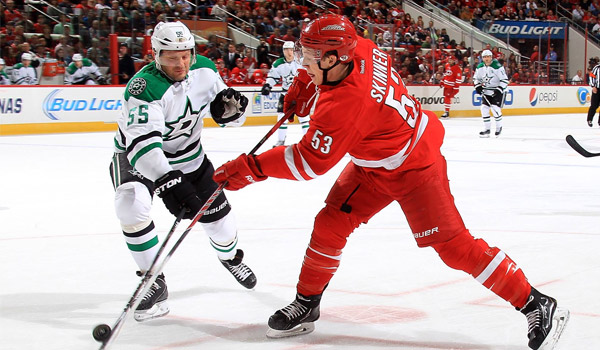 Raleigh, NC — The Carolina Hurricanes have a never say die attitude and are mathematically still in the playoffs with 4-1 wins over the Pittsburg Penguins Tuesday and at home against the Dallas Stars Thursday.

In Pittsburg, the Canes came out slow and appeared intimidated against the Penguins.  The Canes had very few shots early and fell behind 1-0 mid way in the first.

That goal and being dominated so badly seemed to get the competitive juices flowing for the Canes.  With the puck deep in the Penguins zone, Jeff Skinner was creating havoc for Jussi Jokinen to clear the puck.  Jokinen sent a cross ice clear but the puck hit a skate and landed on Justin Faulk’s stick.  Faulk took two strides towards the goal and let go a bomb that beat Marc-Andre Fleury high stick side to tie the game.

According to some Canes, Faulk is one of the team pranksters but he’s serious business on the ice.

Midway in the second, with the Canes on a power play, Skinner had the puck down low and started going behind the net. Everyone on the ice but his good friend Elias Lindholm thought he was going to carry the puck to the far corner. Lindholm went straight to the net  on the near side with Skinner dropping a perfect pass with Lindholm using quick hands, putting the Canes up 2-1.

Skinner’s very young line was on the ice about 5 minutes later and was doing a decent job forechecking the overly confident Penguins from clearing their zone. First, call up Chris Terry tipped a clear, then Skinner and Lindholm stopped another with Lindy stealing the puck and took a quick wrist shot that caught Fleury by surprise to put the Canes up 3-1 and quieted the crowd.

In the third, after a dump in by Faulk, Fleury tried to clear the puck off the side boards. Andrei Loktionov snared the puck right at the blue line then just tossed the puck to the net.  Eric Staal was camped out to the side of the goal and made an unbelievable tip in to close out the scoring for the Canes 4-1 win.

Thursday the Dallas Stars were in town with former Canes Erik Cole and Ray Whitney.  Cole, who has a nice interview published on the Canes’ website, did not play due to an injury and Whitney left the game after just 2 shifts with a lower body injury.

I had a special Cane analyst, Beth, with me at the game and she needs to  have a strong talk with the team as she predicted every goal.

The Stars owned the ice in the first period but Anton Khudobin was playing lights-out with highlight save after highlight save.  No doubt the Canes were glad to escape the first with a scoreless tie.

After waiting all season for a lucky bounce, the Canes finally had one go their way in the second. EStaal passed to John-Michael Liles just inside the blue line in the high slot.  Staal skated through the middle of the ice just as Liles fired off a slap shot.  The puck hit the back of Staal’s skate went up high that would have qualified for the infield fly rule in baseball.  The puck came down just behind Kari Lehtonen and rolled into the net for a 1-0 Cane Lead.

Ninety seconds later with the Canes on a power play, Beth said the Canes need to send a message. Chris Terry had the puck along the half boards, passed up to Liles to bring the puck to the mid area inside the blue line.  Liles saw Faulk on the left point with his stick high for a one timer.  Liles made the pass and with Jordan Staal in front of the net Faulk sent a bullet in for a quick 2-0 lead.

Three minutes later with the Canes on another power play and the same power play unit on the ice, Beth said the Canes need to score a second PP goal. The Canes haven’t had two PP goals in a game in forever so I didn’t hold my hopes high.  Faulk on the right point passed to Terry along the half board.  Terry looked around and saw Liles open on the left point and made the cross ice pass.  EStaal was in perfect position in front so Liles sent one to the net. EStaal’s eyes got big and he widened his stance, allowing the puck to go between his legs into the net for a very quick 3-0 lead.

The Stars got back in the game as Tyler Seguin got behind the Cane defense and put in his 34th goal of the season.

How Does She Do It?

Just before the third started, Beth said the Canes need one more to win the game.

In the third, Skinner brought the puck right to the goal with Thomas kicking the puck to a Stars defenseman. Riley Nash tipped the puck away but another defenseman tried to clear puck out of the zone. Brett Bellemore just crossed the blue line and sent a hard slap shot with Thomas making a stick save along the ice but sent a sweet rebound to Nash. Nash took a quick shot to the high stick side that gave the Canes their second consecutive 4-1 win.

I’m nervous about the game tonight against the Devils: Beth can’t make the game.