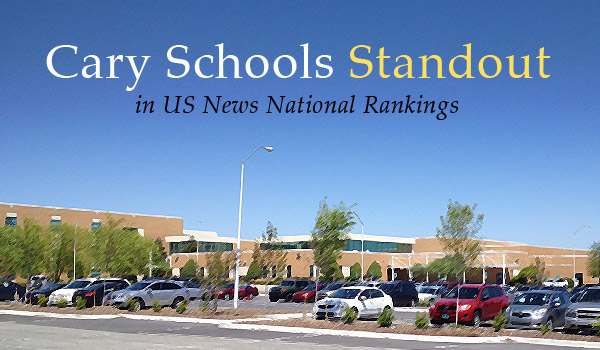 Cary, NC — According to the widely read U.S. News High School Rankings, three Cary schools made the top 10 in North Carolina. But what’s behind the numbers?

Congratulations are in order for three high schools in Cary which ranked in the Top 10 statewide:

The U.S. News rankings include data on more than 19,400 public high schools in 50 states and the District of Columbia. Schools were awarded gold, silver or bronze medals based on their performance on state assessments and how well they prepare students for college.

Read the full methodology of the study.

Nationally, Green Hope ranked #304, Panther Creek was #686 and Cary High was ranked #1116. Statistically, based on a pool of 19,400 schools in the survey, these results are quite impressive:

US News awarded Gold, Silver and Bronze shields to the top 26.7 percent of schools in the survey. Here’s the breakdown:

Here’s where it starts to get disturbing. The U.S. News report has an infographic map that shows percentage of gold medal schools by state. 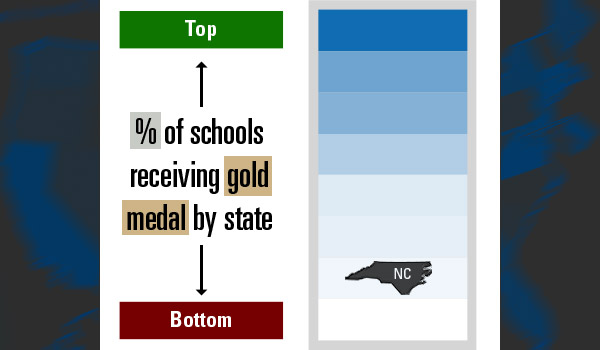 North Carolina is near the bottom in percentage of gold medal schools.

The report also breaks out rankings for S.T.E.M. – high schools that focus on science, technology, engineering and math.

There’s much to celebrate in the 2014 U.S. News High School Rankings. But no one should be satisfied.

Education coverage on CaryCitizen is sponsored in part by Hopewell Academy on Preston Executive Drive in Cary.