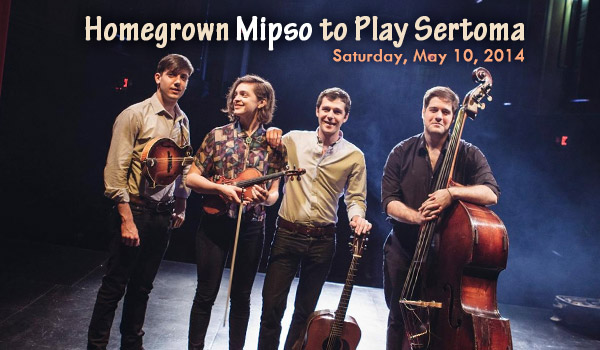 Cary, NC – Mipso, a bluegrass band founded at UNC-Chapel Hill,  is coming home to North Carolina after traveling the East Coast for their spring tour to support their second album, Dark Holler Pop. See them for free on Saturday, May 10, 2014 at Bond Park’s Sertoma Amphitheatre.

The band consists of Joseph Terrell on guitar, Jacob Sharp on mandolin, and Wood Robinson on upright bass. They sing harmonies with heavy influences from Appalachia and bring it forward to the 21st century.  “The three North Carolina songwriters have wandered off the path blazed by Earl Scruggs and Doc Watson to find a new clearing for their southern string band sound.”

The Indy and NPR have taken notice remarking on the band’s role in the reemergence of southern roots music, crediting Mipso with “expanding the vocabulary of common touchstones” for bluegrass. NPR station WUNC hosted live previews of Dark Holler Pop months before its release.

And all over the southeast, Mipso has been busy playing raucously fun live shows that veer from up-tempo original melodies to madcap acoustic covers of Michael Jackson and Stevie Wonder. The group puts all the energy of a college club show into a form of music that predates clubs.  Thier tour includes many college towns including Asheville, Charlotte, Columbia SC, Chapel-Hill and Carrboro, Greenville and Knoxville, TN.

“Mipso is yet another quite-talented trio to emerge from the Triangle and I’ve seen them put on a heck of a show. I get the impression that Dark Holler Pop is an album they’re hoping a lot more people hear, and it’s clear why. The harmonies are strong, the instrumentalism is tight and intuitive, and the production is solid. Dark Holler Pop is a great effort that’s likely to win the band some new fans” – No Depression – Roots Music Authority

“clever turns of phrase and unlikely references worked into forms that are familiar and fitting.” – Indy Weekly