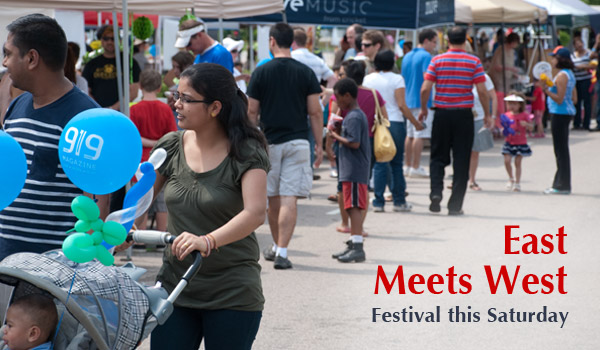 Morrisville, NC – The East Meets West Festival returns to Morrisville’s Town Hall Drive on Saturday, May 17, 2014 from 11:00 a.m. to 4:00 p.m. The event will feature food and performances highlighting the communities diverse cultural population.

How Did the Festival Get Its Start?

I asked Carlotta Ungaro, president of the Morrisville Chamber of Commerce, about the East Meets West Festival.

It grew out of the Town’s Taste of Morrisville event that started in 2011.  As the head of the Chamber, I approached the Town about partnering with the event but making it a festival to celebrate our diverse culture. I’ve lived in many different places and have never seen such an interesting, diverse community.  I felt we needed to celebrate more.  So in working with the Town, we changed the name and added performances last year which helped attract more restaurants.

Last year the event received a great response, despite having less than stellar weather. This year forecasts are looking sunny, not only in the sky, but also with the many restaurants and cultural groups who have agreed to participate.

The town’s recent growth includes many new restaurant which will be offering food for sale and sampling.

With a large Indian and Asian population, Morrisville can highlight these cultures in a family friendly atmosphere on two stages of dance music and cultural performances.

On the West stage, enjoy music from A Fifth of Blues, featuring soulful American-style blues. The East stage will feature Bollywood, Indian and Asian folk dance groups and performers showcasing a variety of cultures. Kids’ activities make the event fun for the whole family.

The Morrisville Chamber produces the East Meets West Festival under their charitable arm, the Morrisville Innovation Foundation. They partner with the Town to help provide logistics, like traffic and police support, as well as additional communications.

This is the second year that Chamber member Brian Donnelly is serving as the festival chairperson. “We are revved up for a great festival.  We have more restaurants, more kids activities and great performances lined up on both stages.  Come out and enjoy the day in Morrisville.” 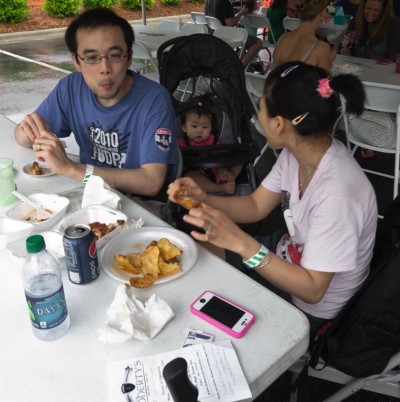 festival goers sample foods before voting for their favorites

Participating restaurants will face off with their favorite dishes in a contest with three categories.

Judges will be tasting the entries for the first two awards, and festival goers will vote separately for their favorites. Attendees are given tickets and they cast votes at the Community Tent.  They can vote until 2 p.m.

Here’s the complete list of restaurants that will be at the Festival.

For more information about the East Meets West Festival, visit the website.

Admission to the festival is free, but tickets will be available for purchase to buy food, beer and wine.

Morrisville coverage on CaryCitizen is sponsored in part by the Morrisville Chamber of Commerce.

Weekend of Wonders in Cary
Scroll to top