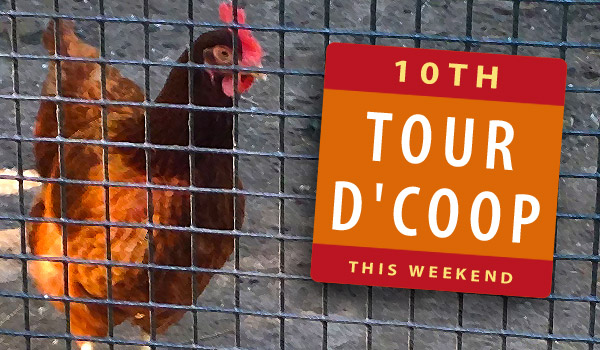 Cary, NC- Over the past few years there has been a lot of talk about chickens in Cary. Michael and Alissa Manfre spearheaded the campaign to legalize chicken coops in Cary and were some of the first in Town to build a coop and raise chickens on their property.

Tour D’Coop started 10 years ago after several “Inside the Beltline” Raleigh residents enjoyed visiting each other’s chicken coops. These early chicken owners thought it would be fun to tour each others homes and share ideas. When the first tour became so popular they decided to make it a ticketed event.

The next year  when over 200 people bought tickets,  an early founder, Bev Norwood,  suggested to donate the funds raised to Urban Ministries of Wake County. Last year over 800 people took the tour.

John Welsh, Development Director for Urban Ministries of Wake County says: The common interest between Tour D’Coop and Urban Ministries is a desire to introduce low-income families to healthier lifestyles and thereby empower them to manage or eliminate chronic health conditions.  The common goal is to help these neighbors achieve stability in their lives.

Our long-standing mission of providing food, medical care and shelter to the poor in Wake County is being strengthened by new initiatives to introduce nutrition and healthy lifestyles into low income communities and, we hope, put an end to the cycles of poverty that can be so discouragingly difficult to escape.

CaryCitizen decided we needed to go check out what a coop looks like in a residential neighborhood. What we found surprised us. 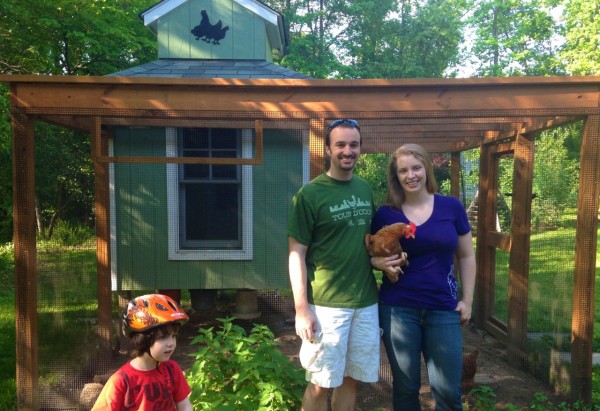 Michael and Alissa Manfre at their home in Cary

Visiting the home of Michael and Alissa Manfre (and son Keiran) we discovered a coop that was not only well constructed , but beautiful. The Manfres have five chickens  (roosters are strictly forbidden as being way too noisy!). They told me that at any given time they have about 2-3 dozen eggs on hand that do not require refrigeration. So many eggs in fact, that they gladly share with friends and neighbors.

Not only do they have these beautiful and happy chickens, but the family raises honey bees. Two towers of 4-6  hive boxes, each hold 10 sheets of honey combs. When harvested annually each box can hold 60 pounds of honey.

Looking across their yard, the eye delights in fruit trees, a strawberry pyramid, a decorative fountain, several rain barrels and at the back a large area for composting. A great stop on the Tour D’Coop!

I asked them how they got into the chicken business to begin with. Alissa described how when they moved to their house back in 2008, they could not believe all the ticks in their backyard grass. They decided they needed to find a healthy, more organic way to take care of their tick problem without spraying toxic chemicals  on their half acre. Their research led them to chickens. Chickens eat ticks. They also produce a very good quality waste for the compost pile. Chickens will eat weeds, and vegetable scraps. Definitely a win- win situation.

But chickens were not allowed in suburban Cary neighborhoods. So they decided to try to change that and began contacting town council and doing lots of research and presentations.

As the chicken laws took four years to pass (the Manfres lost the battle twice before town council finally approved), the couple got into beekeeping. They also continued to build up their garden, planting an assortment of plum, apricot, apple, pear, peach and other trees and shrubs to complement a vegetable garden.

The week after the Cary ordinance passed in 2012, the Manfres received their first chickens.  They housed them in dog crates while Michael began to build the coop he had designed. This is no ordinary shed, or low-roofed structure. The coop is a beautiful little house and even has a copula and a door to which allows access to the three nests. The day I visited, one nest held a surprise of 4 fresh eggs. 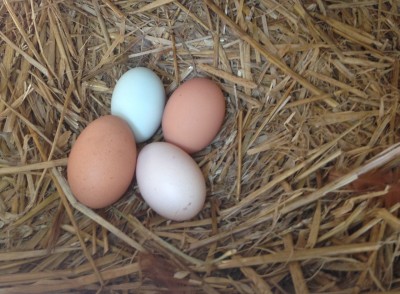 There are 26 chicken coops on the tour this year, 20 of which are new (in case people have toured in the past) Most are located inside the Beltline with a few in Cary. Visitors cannot go peek beforehand, as that is not respectful to the families who own the chickens.

“Each year this unique ‘parade of combs’ continues to grow in popularity and helps the Triangle community better understand and appreciate how local food sources promote good health and nutrition,” said Tour D’Coop Chair M’Liss Koopman. “This year’s Tour D’Coop will be better than ever, with something for everyone! Folks from around the Triangle can enjoy the outdoors while they learn about coops and gardens, grab lunch at the Coop Carnival, and have fun while they help others in our community.”

The 10th annual Tour D’Coop will take place on Saturday, May 17, 2014 rain or shine. This self-guided tour of urban chicken coops, gardens and – new this year – bee hives-  is a grassroots fundraising event that benefits Urban Ministries of Wake County, a charity that serves hungry, homeless and uninsured Wake County residents.

Tour D’Coop tickets can be ordered in advance online or in-person the day of the tour at Urban Ministries and all local Whole Foods locations. Admission is any tax-deductible donation to Urban Ministries of Wake County or five cans of healthy food.

26 locations in Raleigh and Cary. Tickets are donations to the Urban Ministries, or 5 cans of food.

Visit Tourdcoop.com for more more info, tickets and a map.

East Meets West Festival is Back!
Scroll to top