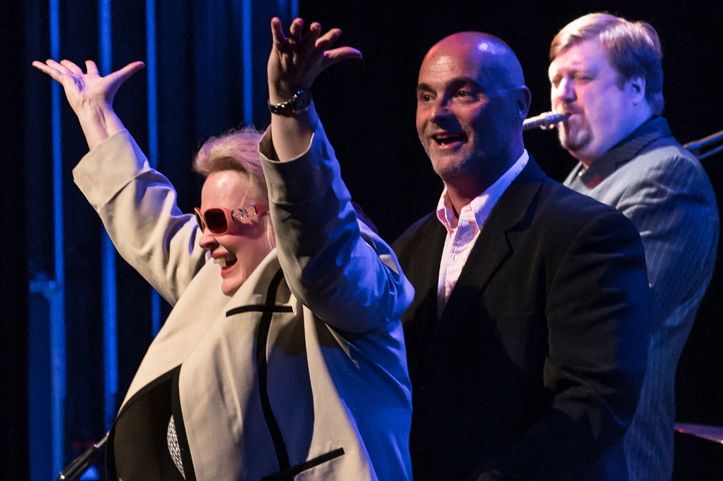 The performance featured Schuur’s upcoming release I Remember You, a tribute to Stan Getz and Frank Sinatra on Jazzheads Records. Hearing Schuur at the 1979 Monterey Jazz Festival, Getz later invited her to sing at the White House. Her 1986 Timeless and 1987 Diane Schuur and Count Basie Orchestra won consecutive Grammys for Best Jazz Vocalist – Female.

Nicknamed “Deedles”, Schuur was born prematurely and oxygen treatment left her blind since birth. Now 60, she’s bounced back from personal struggles following her 80’s success. Her 3½ octave contralto and perfect pitch is astonishing. Her stage presence is one of energy and joy. She makes it look easy as only the best can do.

Opening with a Scat to greet Cary, Schuur followed with Gershwins S’ Wonderful. Besides Schuur’s Vocals and Piano, she had a great band with her: Joel Frahm on Sax and Clarinet, Ben Wolfe on Bass and Donald Edwards on Drums. All accomplished pros, the chemistry was as good as it gets.

Coincidentally, Schuur previewed I Remember You at Birdland in NYC last January with Drummer Ulysses Owens Jr.. Owens was at Cary Arts Center with Neena Freelon in January 2012, also for the Marvelous Music Series.

The Cary Arts Center Stage is getting serious chops.

Both 45 minute sets went quickly. The intimate 393 seat Arts Center Theater has great acoustics and on this evening, a lot of audience interaction. During Cole Porter’s Under My Skin, Schuur and the audience noticed a piano stool leg getting loose and wobbly. It was a living room conversation while a stagehand got it replaced. All 4 players then got to “do whatever we want to do” with John Coltrane’s Love Supreme as a call and response. How High The Moon finished the first set.

Following intermission, the elation of new love made way for heartache and redemption, beginning with Jimmy Webb’s Didn’t We and Second Time Around, a Sinatra standard. The set ended with Stevie Wonder’s hit Once In My Life bringing the mood back upbeat and giving drummer Donald Edwards a chance to solo, unquestionably a crowd pleaser.

The enthusiastic crowd got Schuur back for a solo encore, The Very Thought of You. The audience asked for more but pleading a date the next evening in Miami, Schuur made an enthusiastic exit.

I’m certain more than one Diane Schuur CD was played in audience cars on the way home. In my case, it was her 1999 release Music Is My Life. Her heartbreakingly beautiful a capella version of Over The Rainbow is beyond words.

Guide to Summer Events in Cary