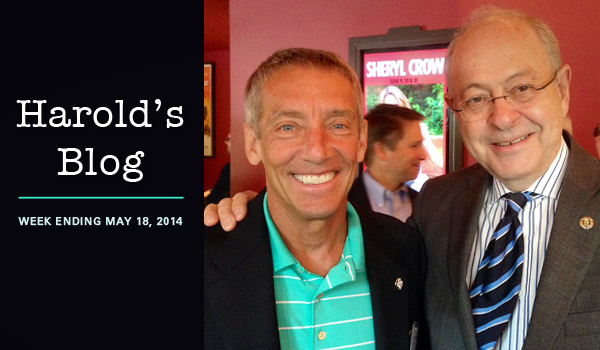 Cary, NC — This week, my time was mostly dominated by the inter-city visit to Nashville.

Monday I joined council member Smith in attending the Honor a Teacher Awards ceremony held at Koka Booth Amphitheater. This program is held by the Cary Chamber and recognizes teachers that go above and beyond the call of duty.

Each honored teacher received a nice glass plaque and a $1000 gift certificate to be spent outside the classroom. This year there were 24 sponsors, including the Town of Cary, for 25 awards. I gave a few remarks at the beginning and later joined council member Smith in presenting the Town of Cary award to a Kingswood Elementary Teacher.

In my remarks I disclosed a little known fact that I taught high school math for two years in Augusta, Georgia in 1979 and 1980. And that I was recently contacted by one of my students after 35 years. That proves that teachers have a lifelong impact on people’s lives.

The inter-city trip to Nashville began with a 6 AM flight on Wednesday with 42 participants. We arrived in Nashville and caught a bus to a downtown hotel where we were staying. We had breakfast in a conference room while presentations were given by Nashville city staff.

I had the pleasure of introducing Nashville’s mayor, the honorable Karl Dean, to the audience. Nashville’s mayor is a “strong” mayor. That is, he performs the job of the mayor and what would be the city manager. Nashville is different in another way in that it is consolidated with the county. In short, that means the mayor and council can control the schools.

In his remarks to us Mayor Dean said that his top three priorities are Education, Public Safety, and Economic Development. He also talked about mass transit, quality of life, the environment, bike/pedestrian programs, and health.

After the mayor we heard from the Nashville Chamber of Commerce. They are also focused on education and together with the elected officials have made great strides in improving the education system. The afternoon was spent touring various neighborhoods in Nashville that have redeveloped. We heard of some success stories and about some things they would have done differently.

Thursday we boarded the bus and headed to Franklin, Tennessee which is south of Nashville. I had the pleasure of meeting and talking with their mayor, the honorable Ken Moore.

Franklin is experiencing rapid growth and actually visited Cary a few years ago to talk about issues we had with growth. Like Cary, they renovated their theater in a newly revitalized downtown. Their renovation was $8.5 million and was paid for entirely with private funds. We took a walking tour of their downtown and a riding tour throughout other parts of town. Our conversations focused on redevelopment and planning issues. It was a very informative visit.

Friday we took a tour of Nashville’s arena, the Bridgestone which houses the NHL Predators. We listened to the head of the arena and others talk about downtown economic development.

Next we went to the downtown transit station to watch a presentation on transit. One interesting part of the presentation was the BRT (Bus Rapid Transit). It is like rapid transit but uses buses and no rails. The vehicles even look similar to light rail vehicles. One of the advantages is cost which is about half of a light rail system. One of the disadvantages is that they don’t spur economic development along their routes because the routes could change.

We boarded a bus and headed to the airport Friday afternoon. Our flight was delayed about two and a half hours but we finally arrived at good ole RDU. I was glad to get home to Cary.

The trip was a great experience. My expenses, and all council member expenses, were paid for by the chamber. While the visit, presentations, and experiences were very valuable I also gained from three days of interacting with local business leaders.

Saturday I attended the third Wheels on Academy show downtown along with Council member Frantz. There were one hundred and forty nine entries. I had the honor and privilege of giving the first Mayors Award to Joe Parsons for his 1963 Studebaker Alanti. What an incredible car. The event was a lot of fun and was well attended.

This week we received an accolade notifying us that the Raleigh/Cary area was ranked #1 for well-being by Gallop.

Emails from citizens this week included comments about the Amberwood apartment tree removal, concerns about construction issues, comments about rezonings, a concern about crime in a neighborhood, and a complaint about a July 4th bicycle road race.

Well that is all for this week. My next post will be on Sunday, May 25th. Although I have Facebook and Twitter accounts those are not the best means of communications with me. Please send all Town of Cary questions or comments to Harold.Weinbrecht@townofcary.org and email personal comments to augustanat@mindspring.com.

From the blog of Cary Mayor Harold Weinbrecht. Above, Mayor Weinbrecht with Mayor Ken Moore of Franklin, TN.