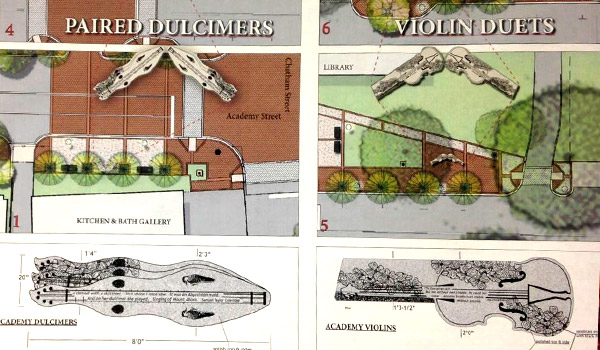 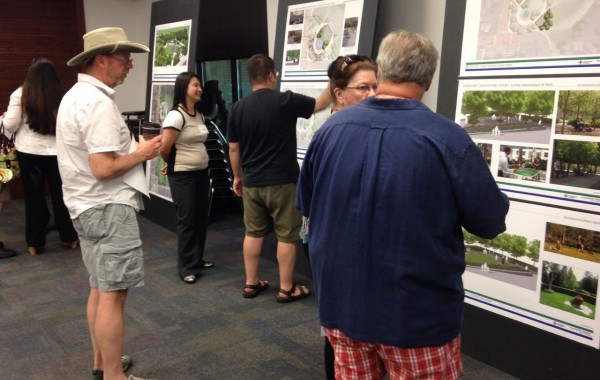 Cary, NC — The Town of Cary held the second in a series of public information sessions about the soon-to-be constructed Downtown Park and streetscape improvement plans on Monday May 12, 2014. Many visitors expressed pleasure with what they saw as well as impatience.

One of the meeting rooms at the Herb Young Community Center held various depictions of what are called 25% plans, meaning that things are moving from concept to actual designs.

Crowds saw the fountain concept that will be a central feature in the town square area of the Downtown Park in Cary. Much controversy has surrounded the fountain as the design team has gone “back to the drawing board” a couple times with instructions from Town Council.

This round recently won approval from Cary council members who were looking for something iconic that will give the area a sense of place, yet not get too “artsy.” The new design has a bowl feature with cascading water, columns and water jets. Think UNC’s iconic “Old Well” as a fountain.

Surrounding the fountain is a wide paved area flanked by two “rooms” that may house permanent tables and benches for chess or table tennis.

Across from the fountain is a large grassy lawn and a permanent raised stage. Town of Cary staff said that the area could hold 500-1000 people for outdoor concerts.

Behind the stage is a terraced area leading to the open space and additional land that the town owns, but does not yet have the funds to fully design.

The second set of plans that the public viewed were the improvements proposed for Academy Street. If you have ever walked on the current aggregate stone sidewalks, you understand just how much this area is in need of improvement. High heels and the current sidewalks don’t mix.

The new designs have a mix of several types of pavers and scored concrete. There will be additional trees lining the street placed in decorative tree grates. Benches will line the street creating several shady gathering places all along South Academy Street.

For added interest near Park and Chatham streets, raised granite decorative benches depicting violins and dulcimers will be constructed to highlight the area’s ties to music.

The timing for this facelift will be gradual. Now that the 25% plans have been approved, the designers and architects will proceed this fall to finish the plans. Construction is due to begin in the Spring of 2015 and should be finished by the following Spring.

No Pain, No Gain

During the streetscape improvements, there will be some road closings, and detours using Harrison and Walker streets as alternate routes to navigate through the downtown area. At times South Academy will close down to one lane.

And of course construction will be going on during the 2015 Lazy Daze Festival which will bring its own set of headaches.

No one ever said progress was easy. Anything worth having, often means some sacrifice, right?

The Downtown coverage is sponsored in part by the Heart of Cary Association.

Weekend of Wonders in Cary