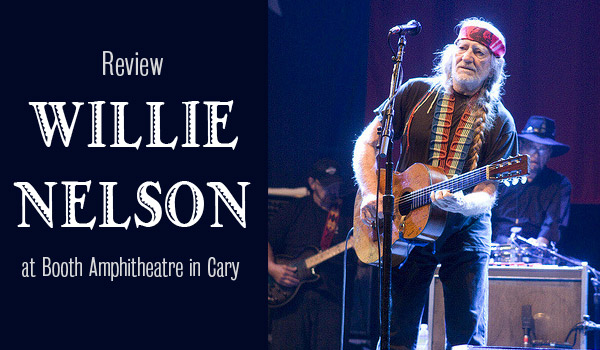 Cary, NC — Every time I plop down a lawn chair on the pine straw of Koka Booth Amphitheatre I am reminded how lucky we are to have this venue in our town.  When country legend Willie Nelson was in town I had to go.  It was a plus that I would get to hear the angelic voice of Alison Krauss along with Union Station.

With Alison Krauss there were no surprises. After a little speech about how the moment she lands here in North Carolina that she is happy – “even people in the airport are … well … nice” –  they broke into “The Lucky One”.   I feel the same way about Koka Booth Amphitheatre.

Midway through their set the crowd got involved when Krauss and band played “I am a Man of Constant Sorrow”.  The male singer in the band, John “Dan” Tyminski, was the Soggy Bottom Boys voice for George Clooney in the hit from the movie “Oh Brother, Where Art Thou?”.

Krauss and the Station were great.  Nailed them all.  Candy for bluegrass addicts.

Willie, well, Willie was Willie.  In fact, I had seen him perform several times before and this concert was different from them.  This was ALL Willie. There was very little in the way of backup vocals, very little in the way of backup instruments.  Just the Red-Headed Stranger and “Trigger” (the name for his beat up, worn out Martin guitar).  By the way, Willie Nelson is an AMAZING guitar player. I don’t care if you like his music or not, he is all over that grimy fret board.  Trigger is part of Willie.

He opened with “Whiskey River”.  What else?  Willie Nelson once said, “If you can’t sing, you better have style”!  He was blessed with both.

As I watched him bang and pull at the nylon strings of his beloved beautiful mess of a guitar, with the huge Texas flag as a backdrop I wondered how much longer Willie would be around and how everyone that loves country music needs to see him before he isn’t around anymore.

“Well there’ll never be another Red-Headed Stranger”  – The great George Jones in his song “Who’s Gonna Fill Their Shoes?”