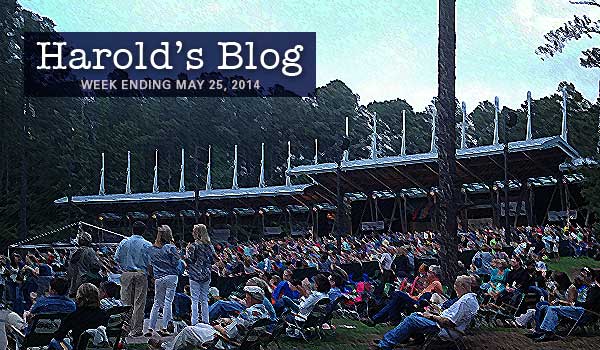 Cary, NC — This week was the last week before a long vacation. So I was very busy trying to get things done before my trip.

Monday I attempted to contact each council member about the agenda for Thursday’s council meeting. The purpose of these calls is to hear of any questions or concerns they wanted staff to be prepared to address at the council meeting. I contacted all council members except one. There were a couple of council questions about the decision to put waivers on the consent agenda. There were a lot of comments about the discussion items which, at the time, all had valid protest petitions. Proposals with valid protest petitions require six out of seven council members to approve. Later in the day I addressed these items with staff members. Based on the amount of public hearings and items with protest petitions I anticipated Thursday’s meeting to last until 11 PM.

Monday night I drove to Augusta, Georgia to prepare to play the Augusta National golf course on Tuesday morning. Tuesday I had the pleasure of playing the infamous course. I am not a good golfer but I had a good time. I hit several greens in regulation but only managed one par. I appreciate what the pros experience on those greens. I three putted from six feet twice! After my round I quickly headed to the car and drove back to Cary for the budget work session. I got home in just enough time to shower and change before going to town hall.

The budget work session on Tuesday was the town’s first. We accepted the town manager’s recommendations and gave feedback on four items for clarification. Decisions made on those budget items include:

The work session finishes the creation of the proposed budget. We reserved time for another meeting to incorporate additional changes as a result of the public hearings.

Wednesday I attended the Transportation Advisory Committee meeting of the Capital Area Metropolitan Planning Organization (CAMPO). Several items were approved. Those that were of significance to Cary included:

The meeting adjourned after about an hour.

Thursday was a regularly scheduled council meeting. The agenda included 14 consent items, 5 public hearings, 6 discussion items, and a closed session on 3 issues. The public speaks portion of our meeting consisted mostly of speakers recommending denial of the rezoning request at Holly Springs Road and Cary Parkway.

There were three major discussion issues. The first was a rezoning on Harrison Avenue near Maynard for condos. While I would have voted against this the residents actually preferred this over institutional (a school). So the council unanimously approved. I am confident this would have failed if the residents had not requested we approve.

The second discussion issue was the rezoning at Holly Springs Road and Cary Parkway. This had a valid protest petition which means that it would take at least six council members to approve. The proposal had 8,000 square foot lots along Holly Springs Road and 12,000 square foot lots toward Campbell Road. In my statement I said I would vote against this unless the proposal had at least 12,000 square foot lots minimum and bigger lots along Fordland Drive and toward Campbell Road. The rest of the council also expressed objections. The applicant asked for 30 days to make changes so the council tabled this item until our June 26th meeting.

Our last discussion item was a proposed rezoning along Stephens Road to allow 8,000 square foot single family homes. Most of the objections were about required connectivity which we are not allowed to consider during a rezoning. In addition, residents stated that their children would not be safe playing in the street if this were built. I felt this matched the rezoning on the other side of the street. I could not consider connectivity or the fact that children are playing in the street to deny this proposal. The council unanimously approved the rezoning. A closed session was held for about thirty minutes and the meeting adjourned a few minutes after 11.

Friday I participated in a meeting of the North Carolina Metro Mayors Coalition. The discussion was a review of current legislation that would hurt municipalities. This included bills on fracking, privilege license, removing local tree ordinances, removing local design ordinances, and more. The mayors also discussed the bi-partisan effort to have a common sense drawing of districts. The meeting lasted about 30 minutes.

Emails this week included comments about rezoning cases, the Amberwood Apartment’s tree removal of part of their buffer, the NC legislators removing local authority to protect trees, the US Postal Service not allowing mailboxes for individual houses.

The next two weeks I will be out of town on vacation so there won’t be a post for a while. My next post will be on Sunday, June15th. Although I have Facebook and Twitter accounts those are not the best means of communications with me. Please send all Town of Cary questions or comments to Harold.Weinbrecht@townofcary.org and email personal comments toaugustanat@mindspring.com.

AKA Sigma Tau Omega in Cary