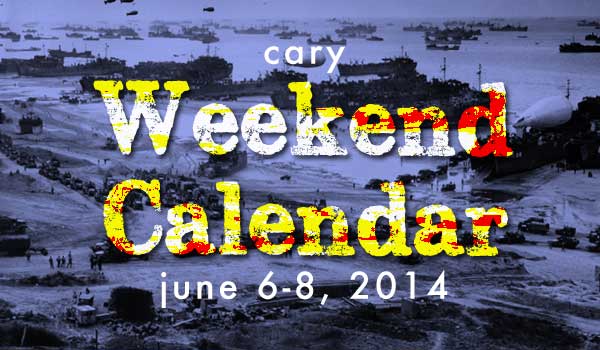 Cary, NC — The warm weather is here and it’s a weekend of local pleasures in Cary.

Thursday has 31 events, everything from business and networking to parent-child stuff.

This week, we’d like to highlight CaddyShack at Movies by Moonlight under the stars at Koka Booth Amphitheatre.

June 6, 2014 is the 70th anniversary of the D-Day invasion of Nazi-held France during WW II. Hang a flag, kiss a vet or visit Cary’s Veterans Freedom Park.

Friday night also has The Music of John Williams at Summerfest, a dance party with Orchestra International La Clave on the street at the corner of Chatham and Academy, something called a Glow in the Dark Race at Wake Med Soccer Park, The Michael Jones Trio at Unvined and much more.

More Friday events on the Calendar.

Saturday morning, you should go to the farmers market. It’s good for you.

Also Saturday, Doherty’s is having an Totally ’80’s Party starting at 4 PM. Saturday night, the NC Symphony is back in action at Booth Amphitheatre with a show called Broadway Romance. And, the Old North State Band is doing a free show at Sertoma Amphitheatre in Bond Park.

More Saturday events on the Calendar.

Sunday is usually a pretty quiet day of the week in Cary. But this weekend, start your day with Splash & Dash, a fitness challenge, at the Cary Y.

And, on Sunday evening, get in the mood for the World Cup as the RailHawks take on FC Edmonton at Wake Med Soccer Park in Cary.

More Sunday events on the Calendar.

Also of note this weekend in the Triangle, Maker Faire is the NC State Fairgrounds on Saturday, June 7, 2014. It’s a celebration of DIY technology, engineering, mechanics and science. Geeky fun for the whole family.

Triangle Restaurant Week continues through Sunday. Eat something, it wouldn’t kill you.

In Durham, check out Indy Week’s Best of the Triangle Party, food, music and more in Central Park. Easy ride up the Triangle Expressway from Cary.

The CaryCitizen Calendar of Events is edited by Lindsey Chester. D Day invasion picture from WikiPedia.

Weekend Events coverage on Cary Citizen is sponsored by NC Summerfest at Booth Amphitheater and by Waverly Farmers Market.