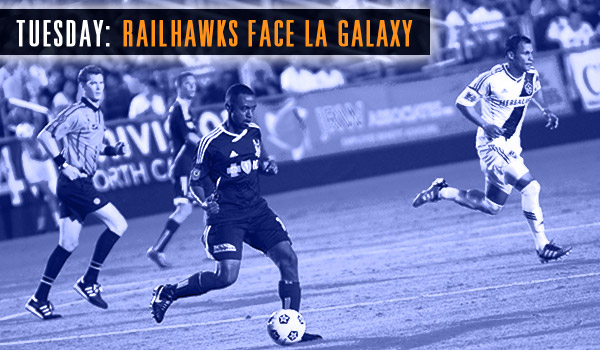 Cary, NC — To those who say “soccer will never be big in then United States,” we say “Welcome to Cary.”

On Tuesday, June 24, 2014, Cary’s own Carolina RailHawks face 4-time MLS champion L.A. Galaxy in the fifth round of the Lamar Hunt U.S. Open Cup. The match is set for 7 PM at Wake Med Soccer Park.

L.A. Galaxy has visited Cary on two other occasions, losing twice to the RailHawks. Both matches set attendance records – the most recent drawing 8,121 fans.

Expect another big crowd for Tuesday night. As of this writing, only lawn seats are still available. Get tickets.

Another sign that soccer is a big deal here in Cary (and the Triangle) is when the town issues “heavy traffic delay” warnings around soccer matches.

From Town of Cary via email:

In advance of the Carolina RailHawks game against four-time MLS Champion the Los Angeles Galaxy on June 24, the Town of Cary is advising drivers to expect heavy traffic delays in eastern Cary near WakeMed Soccer Park, 201 Soccer Park Drive, from 3-8 p.m.

Everyone seems to be talking about soccer for the last couple of weeks.

On Sunday, Wake Med Soccer Park had it’s second free World Cup Watch Party. All the bars and pubs in town have the World Cup on the TV all day.

One of our favorite places to watch a little futbol is Fortnight Brewery on Maynard, home to English ales and English soccer fans.

Note to world: Soccer is Big in Cary.

Watch out for that traffic on East Chatham and Hillsborough on Tuesday evening.

Annie’s Attic is Back in Downtown
Scroll to top