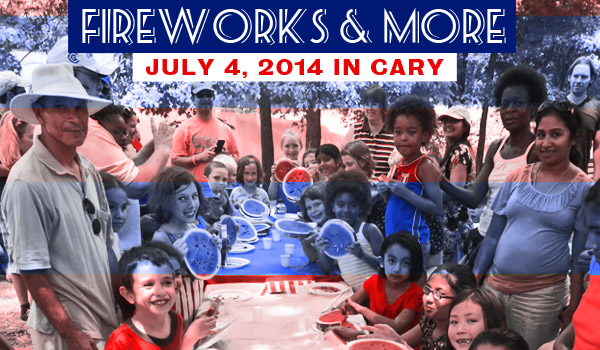 Cary, NC — There’s always lots to do here in Cary to celebrate Independence Day. Activities start July 3 and continue all through Independence Day on Friday, culminating in a July 4 Fireworks extravaganza at Booth Amphitheatre in Cary. Make plans now.

On Independence Eve (Thursday, July 3rd) , Applause! Cary Youth Theater and the Cary Town Band will be perform a free concert at the Cary Arts Center. Traditionally this concert has been held outdoors at the Sertoma Amphitheatre in Bond Park. The Town moved this year’s event inside to a larger venue to account for the expected large crowd  and to head off any inclement weather.

The Cary Town Band will perform their 27th Annual Patriotic Celebration – A March for Patton. Respectfully dedicated to Lt. Gen. George S. Patton, Jr. and the gallant Officers and men of the Third U.S. Army on April 10, 1945. This piece was recently rediscovered by the event’s guest speaker, Colonel Lawrence A. Devron in a trophy case at Shaw AFB near Sumter, SC. This will be its North Carolina premier. The evening will also include British and German marches.

For last piece of the night, Hymn to the Fallen, the band will be joined by strings from the Triangle Area Community Orchestra (TACO) and a chorus from the Concert Singers of Cary.

The free fun continues over at Koka Booth Amphitheatre starting at 3:00pm.

A Kids Zone area will be running from 3-7pm and includes : rides, games, magicians, face painters and more!

There will be more contests including a “Frozen” t-shirt contest,  watermelon eating, ice cream eating, and the famous boat regatta on Symphony Lake.

The evening is topped off by another Cary Town Band performance, followed by the annual NC Symphony, with a finale of spectacular July 4 Fireworks.

All the fun is free (except some nominal fees in the Kids Zone), and folks can bring in picnics including beer and wine as well as tarps and chairs.

Photo by Brooke Meyer. Seasonal coverage on CaryCitizen is sponsored in part by Rally Point Sport Grill on N. Harrison Avenue in Cary.