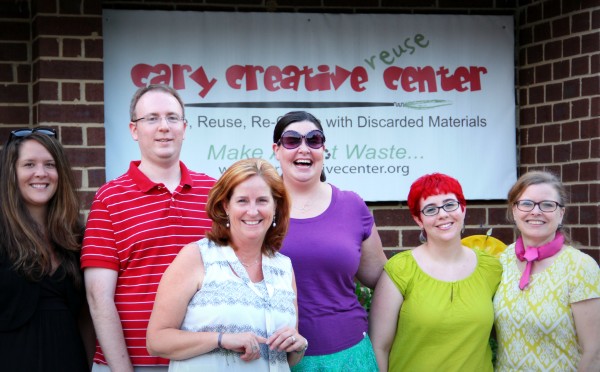 Cary, NC- The Cary Creative Center has embarked on a mighty goal, to raise $60,000 by September in order to expand into a new larger location. Their biggest fundraiser of their “Raise the Roof” campaign will take place July 17, 2014 and it’s called Bohemian Bash.

Dawn La Rue, director of the event, promises  “an artsy, groovy celebration of C3’s accomplishments as well as our vision for the future. ”

The Cary Creative Center has simply outgrown their current starter location, and must raise money in order to move to move suitable quarters. They need better visibility than where they currently are on Wilkenson Avenue to attract some drive-by visits in addition to their destination location status.

Betsy Dassau, the director and brainchild behind the Cary Creative Center, says they need greater visibility and are seeking a retail type location. The current space is limiting their ability to provide expanded programming. Its a mix of half warehouse, one-third retail space, one crowded office and one craft room.

With a bigger set-up, C3 could increase their offerings of parties, which provide a healthy revenue stream. Betsy stated that if they were in a “strip center” they would have foot traffic which they do not have now. They are “exploring their opportunities” now, with a plan to secure space by August and move during September.

Bohemian Bash to Raise the Roof

Dawn La Rue, who is on the board of directors for C3, is heading up the fund-raising campaign. She says she is not a crafty person, but what she does know is social media and fundraising. She is in charge of fundraising and the director for the Bohemian Bash event.

The biggest event planned in the campaign is the Bohemian Bash and will take place at Cypress Manor in Cary. Leslie Lockhart, Betsy’s Assistant, added the theme sprung from the idea that Bohemian is “cool” and they wanted to focus on a kitchy-y and creative event. This gala will include a silent and live auction, a juried art show of art created using C3 recycled items, heavy hors oeuvres and music. Dawn said after this event, they should know where they stand in relation to their goal of $60,000.

Retail space isn’t cheap and the Cary Creative Center has been fortunate to get their start in a little-used space owned by Town of Cary. Dawn and Betsy were quick to point out that the Town has been very supportive as they got their start. But they have now outgrown that space and are searching with a commercial realtor for suitable space that means paying the prevailing market rate. A huge leap of faith has put them on their path to expand and begin this ambitious campaign. We wish them luck!

Hurricane Arthur: Not in Cary