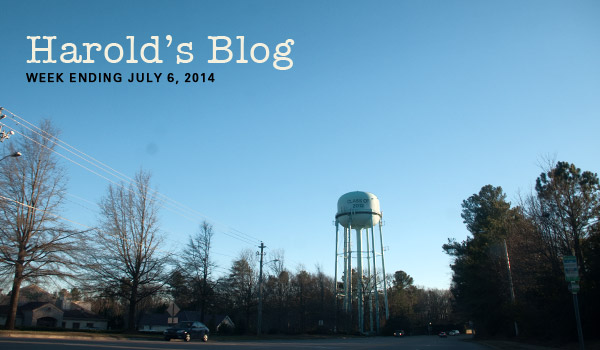 Cary, NC — This week was a holiday week and therefore was a much slower week. This is one of the few times during the year where council members get to take vacations or be with their families.

Monday the council interviewed candidates for the town clerk position. The town clerk is one of three people that report directly to the town council. The others are the town manager and the town attorney. The Town Clerk is responsible for giving notice of Town Council meetings, preparing the council agenda, recording Council proceedings, serving as custodian of all permanent town records, keeping the Town Seal, attesting all Town documents, maintaining the Town Code, managing the various boards and commissions, the administration of Hillcrest Cemetery, and providing support services to the Town Council. The staff in the Clerk’s office includes the town clerk, the deputy town clerk and two administrative assistants.

The interviews for the new town clerk went very well and council is hopeful that there will be a new town clerk named soon. Our outgoing town clerk is retiring as of August 1st. Without a doubt, she is the best town clerk in the state so it is a difficult task to replace her. Fortunately, she has trained a great staff and I am sure they will keep things running smoothly.

Tuesday I was scheduled to meet with both the town manager and the town attorney in separate meetings. Since council spent time with them giving annual reviews last week there wasn’t much else to talk about. So my meetings with both of them were brief and via the phone.

Friday night was perfect weather wise for the town’s annual Fourth of July celebration with low humidity and mild temperatures. I, along with my entire family, attended the symphony and fireworks at the Booth Amphitheater. I gave a few welcoming remarks before the symphony’s fantastic performance. The fireworks show was amazing as usual. In all, it was a great celebration.

Emails this week included a report from the Homebuilders Association. In their report it showed that Cary had twice as many residential permits pulled than any other municipality including Raleigh for the month of June. We also had more remodeling permits pulled than any other municipality. We continue to show slow steady growth and our challenge of providing adequate infrastructure remains.

We also received notification and staff reports this week regarding the Maynard Road water tower. Initially council was told that saving the old tower would be cost prohibitive and could have other issues. This report, which is coming to council for a decision on July 17th, will have four options with two including refurbishing the Maynard water tower. The option recommended by staff will preserve the Maynard Road water tower across from Cary High School and add an additional water tower off Kildaire Farm Road. I suspect council will support this option.

I also received several emails this week from the NC Metro Mayors Association staff about the state budget. They believe that compromises are being made. Here is how they described it:

“In a highly unusual move, the House and Senate gathered together in a committee room and the two head budget chairs made budget compromise offers to one another in a public meeting.  Senator Brown likened the back and forth to selling a car, to which Representative Dollar responded that the House had not bought the car, but liked some of the features.  The public negotiations were limited to specific revenue estimates on the lottery, Medicaid, and reversions.  Once the two chambers agree on revenue numbers the subcommittees can begin negotiating spending plans.”

I am disappointed that our representatives continue to support bills that will strip away authority at a local level including our ability to protect trees and to protect town aesthetics.

Emails from staff this week include several projects under review. Some of the projects submitted since the beginning of May include:

The town manager also notified council of a brief vacation which is well deserved.

Emails from citizens this week included a complaint about cluster mail boxes required by the United States Postal Service, a thank you for helping with a burned out street light, and a request to investigate smart benches.

This week will be another relatively slow week. Activities will include a couple of meetings and a quasi-judicial hearing.

My next post will be on Sunday, July 13th. Although I have Facebook and Twitter accounts those are not the best means of communications with me. Please send all Town of Cary questions or comments to Harold.Weinbrecht@townofcary.org and email personal comments to augustanat@mindspring.com.