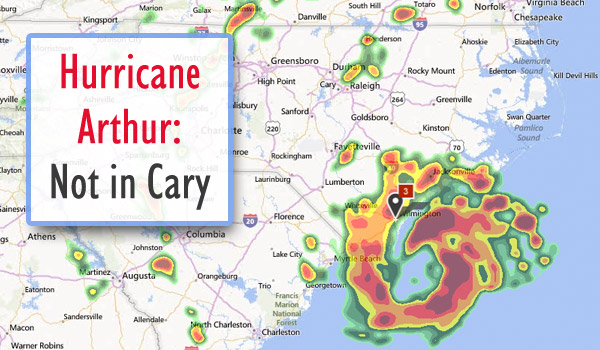 Cary, NC – Myrtle Beach and Wilmington have gotten hit, but Cary and the Triangle will score a near miss as Hurricane Arthur churns up the Atlantic coast of North Carolina.

Hurricane Arthur: Not in Cary

Cary can expect some scattered showers Thursday afternoon and evening, with a return to sunny skies on Friday and Saturday, July 3rd and 4th.

Hurricane Arthur, the first named storm of the season, is currently a Category 1 storm but may strengthen to a Category 2. The storm is expected to slash its way across Cape Hatteras Thursday night into Friday morning. Residents and visitors to the Outer Banks as well as northeastern N.C. should pay attention to official channels in case evacuation is necessary.

Over the weekend, the Weather Service predicts Hurricane Arthur will  largely bypass the Mid-Atlantic states before taking aim at New England and Eastern Maine.

Experts predict a lighter than usual hurricane season for 2014. But I guess it’s all about where you live.

Based upon our own observation, hurricanes seem to track repeatedly along the same path throughout a season. It will be a long summer in North Carolina if this year’s track comes up along the coast of Florida.