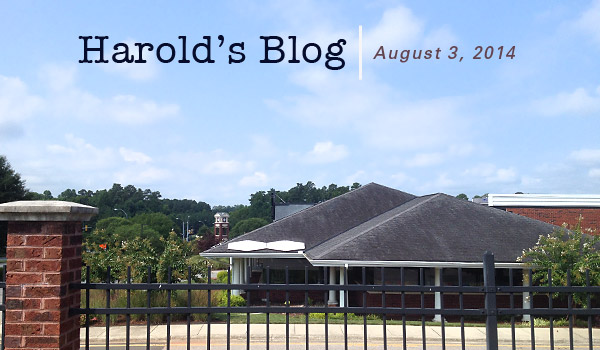 Cary, NC — This was a busy week that included a couple of historic events: the swearing in of a new town clerk and the recognition of 50 years of service by Cary Rotary clubs. 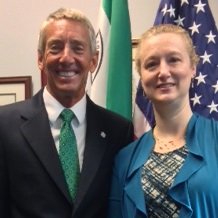 Monday morning I had the honor and privilege to administer the official oath of office to our newly appointed town clerk Sherry Scoggins. She is replacing Sue Rowland who retired at the end of August. Cary is blessed to have had Sue Rowland serve for 22 years and to find such a great clerk to replace her. I look forward to working with Ms. Scoggins and believe she will do an outstanding job.

Monday afternoon I met with management, directors, legal, and administration to go over the agenda items. We talked about council members concerns as we went over the items. Our agenda review lasted less than thirty minutes. I estimated that Thursday’s meeting would end around 8:30 PM.

My last meeting on Monday was with the town manager. We only had a couple of topics to talk about so our meeting only lasted a few minutes.

Tuesday the council held a work session to discuss the tree preservation ordinance. As a result the council agreed to the following tier one priority list:

Council then reviewed tier two priorities, authority for removal, champion trees in bio-retention streetscape, and the current clear cutting ordinance. Some of the criteria for removal of champion trees include a life expectancy of less than ten years, greater than twenty percent radial trunk dieback, and two or more major dead limbs. The revised tree ordinance will be presented to council on August 28th. The work session concluded after about an hour and a half.

Later Tuesday council said their private goodbyes to our long time town clerk Sue Rowland. She not only provided a great service to the town, staff, and council but was a friend to all. She will be greatly missed.

Wednesday I attended Wind Down Wednesday at Waverly Place and talked with several business leaders. Waverly is quickly becoming a destination and businesses are filling up the center. In my conversations I understood that there were very few vacancies remaining.

Thursday’s council meeting had three topics that generated most of the discussion.

A public hearing for a townhome proposal with six units to an acre on Holly Springs Road concerned me. That proposal was forwarded to the Planning and Zoning board for their review. I am skeptical and will need more to convince me that the proposed density is the best use of that land.

Another topic that generated discussion was staff’s proposal for a pilot program to narrow Harrison Avenue to two lanes with a turn lane and bike lanes between Maynard and Chatham. Council seemed to have concerns with this and asked for a public hearing which will be held at our August 14th meeting.

The other major topic of discussion was the Pritchet rezoning of single family homes at Cary Parkway and Holly Springs Road. This proposal has seen several revisions and has been delayed several times. Even though there was a valid protest petition, requiring six of seven votes for approval from the council, it passed. My feeling was that 75% of this proposal was good and the remaining 25% was questionable with its density. However, the applicant made several concessions which I believe will prove that this proposal will blend nicely into what is around it. This was a very tough decision for me for several reasons. One reason was that I live very close to the proposal and literally heard from my neighbors about it.

Friday was a tribute and a dedication of 50 years of service by the Cary Rotary clubs. A monument including a time capsule was unveiled at the Cary Chamber of Commerce to mark this occasion. The ceremony had over a dozen speakers including myself. Here is an excerpt from my comments:

… 50 years ago in 1964 milk was less than a dollar per gallon. It only took a nickel to mail a letter, and $20,000 could get you a new home. I was a living on Waldo Street and walking to Cary Elementary every day by a chicken coup. I didn’t know if but my uncle, Fred Bond, would soon be elected mayor. The population here was about 5,000, and our community proudly found itself with its first Rotary Club.

Today, we’re so fortunate to have five active Rotary Clubs that continuously give time and talents to benefit Cary. … 50 years is a long time. And during that time our five Cary rotary clubs have never deviated from their mission: to provide community service at its best. …

The ceremony lasted about an hour. The rain held off and it was a great event. The Rotary will continue the celebration of 50 years of service at a gala to be held on August 15th.

After the ceremony I traveled to Greenville to help my daughter move into a house for her senior year at East Carolina. I spent the remainder of the weekend catching up on work.

Emails from staff this week included a reminder about the hometown spirit award. The Hometown Spirit Award is given annually to a Cary resident who enhances the quality of life in Cary by preserving, promoting and carrying out positive and quantifiable traditional small-town community values and traits as embodied in the following criteria:

Applications will be accepted from August 1st through September 8th. The winner will be recognized at November 20th council meeting. So if you know of someone that should be considered PLEASE nominate them.

Other emails from staff included the 2nd Quarter report. Here are a few of the highlights:

The report can be read in its entirety at http://www.townofcary.org/Assets/Town+Manager$!27s+Office/Quarterly+Report+Documents/Second+Quarter+Report+2014.pdf.

Emails from citizens this week include inquiries about a traffic signal, concerns about our current recycling, several comments about the rezoning at Holly Springs and Cary Parkway, a concern about the police click-it-or-ticket project on Harrison Avenue, and several invitations.

This week will be a slower week for me. It includes an Eagle Scout ceremony, a quasi-judicial hearing, and a few meetings.

My next post will be on Sunday, August 10th. Although I have Facebook and Twitter accounts those are not the best means of communications with me. Please send all Town of Cary questions or comments to Harold.Weinbrecht@townofcary.org and email personal comments to augustanat@mindspring.com.