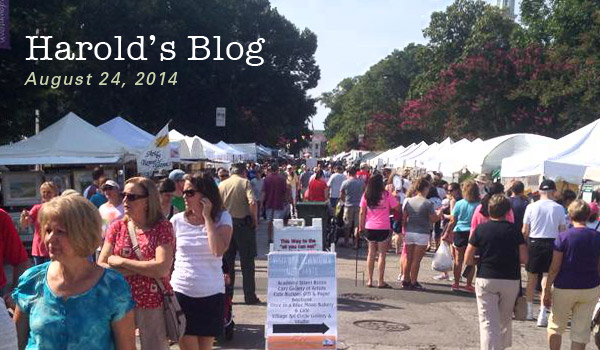 Cary, NC — This week was slower than last. Slow weeks will become very rare as we move further into the year.

Monday my weekly talk with the town manager was very brief with no new information to share.

Monday night I met with the Wake County Mayors Association. Nine of the twelve mayors were in attendance. Missing were the mayors from Holly Springs, Wendell, and Morrisville.

Our first discussion was on requests to speak with our group. Other topics included the Wake County commissioners awarding hotel/motel funds to Morrisville for a skate rink and to Knightdale for several Naismith basketball gyms.

We spent a great deal of time talking about the crisis in Ferguson, Missouri and how some of those issues might be in our own towns.

Tuesday was the quarterly joint meeting of Cary and Morrisville. Some of the information included:

Our meeting lasted about an hour and we will meet again in November.

Wednesday I attended a meeting of the Capital Area Metropolitan Planning Organization (CAMPO).

There were three items that were approved that positively impacted Cary: the statewide prioritization point assignments, the call for locally administered projects for fiscal year 2016, and the final adoption of CAMPO’s memorandum of understanding. The decision portion of this meeting lasted about 45 minutes.

Wednesday evening I joined seven of my friends as we attended a soccer match at Wake Med between the US National team and Switzerland. The place was packed with close to 10,000 in attendance. What a great showcase for our town.

After giving remarks, I fulfilled the ice bucket challenge I received from teen Kashif Osman of Cary. I was joined by Garner Mayor Ronnie Williams, Morrisville Mayor Mark Stohlman, Council member Michael Schlink of Morrisville, council member Lori Bush of Cary, and council member Ed Yerha of Cary. I challenged all Cary citizens and would urge all to at least give a monetary donation to the local chapter of ALS.

This week in kudos, Raleigh-Cary was ranked Number 2 on Forbes’ best list for your professionals. This is yet another reason why Cary is one of the greatest places to live, work, and raise a family.

Emails from citizens this week included comments for and against our decision not to remove a traffic lane for a bicycle lane on Harrison Avenue, a complaint about an unkempt property, a comment about the potential hacking of Cary’s traffic light system, a concern about development proposals on Green Hope School Road, a complaint about CTran, and a complaint that Cary is growing too fast (by the way, we are growing by less than 3%).

Next week will busy with a regularly scheduled council meeting, a work session, a taping of Cary Matters, and a political fundraising event.

My next post will be on Sunday, August 31st. Although I have Facebook and Twitter accounts those are not the best means of communications with me. Please send all Town of Cary questions or comments to Harold.Weinbrecht@townofcary.org and email personal comments to augustanat@mindspring.com.