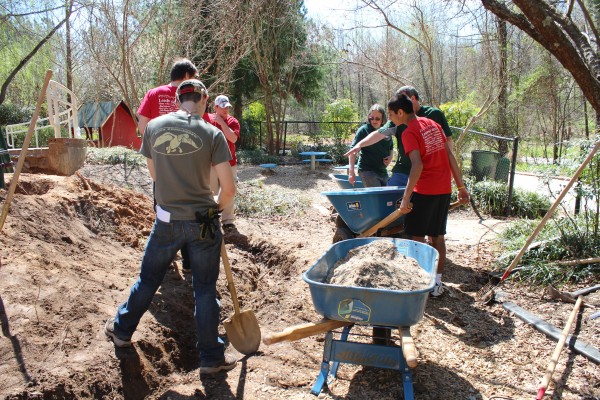 Volunteers helping to renovate the Kids Together Playground

Cary, NC- After 14 years of play, the large, Climb & Slide structure in the Kids Together Playground was showing signs of wear and tear.

Time for a Refresh

One of the features had broken and was removed, but the equipment manufacturer was no longer in business, so it could not be repaired. Other parts were getting creaky. The playground remained safe, but the town decided it was time to replace the largest structure at the playground.

The planning process began during the summer of 2012 with an understanding that there was value in considering changes and additions to take advantage of current developments in play research and equipment design and add ‘something new’, but it was important to retain the spirit and valuable aspects of the original structure.

Parks Planning Manager Paul Kuhn arranged a meeting for the board of directors of Kids Together to meet with the playground equipment distributor, Carolina Parks and Play.

The purpose of the meeting was to get some idea of the equipment they offered and to consider the features that might be preferred. The Kids Together board included parents and grandparents, some of whom have children with special needs; a mobility specialist with the Department of Public Instruction; founding members of the organization who were involved with the original design; and others who were interested in the playground.

After the meeting, the board members reviewed the equipment offerings and submitted their “wish lists.” Like all wish lists, they exceeded the budget, but several components appeared repeatedly, in particular: the ‘Sway Fun’, the roller slide and acoustic and sensory play features.

In May 2013, the project was assigned to a new staff person, Landscape Architect Amy Mackintosh, who contacted two of the original design team members, Robin Moore, from NCSU’s Natural Learning Initiative, and Robb Harrison, the primary landscape architect for the project.

They contributed their time to provide input on an initial design, then reviewed and again advised to fine-tune it. The Kids Together Board of Directors was presented with two designs for review and selected one for further development and cost estimates.

By the end of the summer of 2013, the plan was finalized.

Construction of the new structure, along with replacement of the bridge and slide in the Preschool Play Area, was scheduled for the last week in March and the first week in April. Just as in 2000, volunteers were recruited to work alongside crews from Public Works. Little did they know that in the first three days they would be working in snow, sleet and freezing rain. The weather cleared by week’s end.

All told, 114 volunteers contributed 433 hours of effort to complete the play structure, shovel clay and dirt to prepare for the safety surfacing, and install plants. 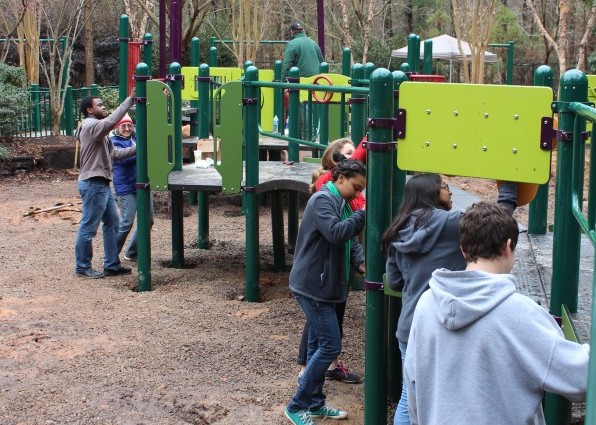 The new structures were ready for play in late April and they haven’t had a moment’s rest since.

The new School-Age Climb and Slide area includes a popular roller slide, which especially attracts younger children. The bongos and chimes in the acoustic play center ring out with joy, and the ‘Sway Fun’ gives children and their parents a chance to explore a new kind of motion that they produce by rocking. The bright red spinner and a rock climbing wall are also new features.

Inclusive Equipment- For All Abilities

A high priority was to assure that the new structure was inclusive, offering features that are approachable by a child in a wheelchair or who might in other ways be physically challenged. As before, the new design includes a wheelchair-accessible route from one end to another and the acoustic and sensory play panels are easy to roll up to. The “Sway Fun” has plenty of space for wheelchairs to gather and the roller slide is designed for ease of use. 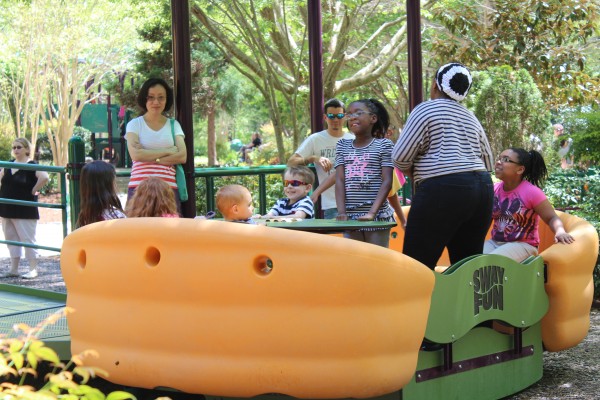 With the new structures in place, Kids Together is ready to celebrate with its annual fundraiser, the Walk, Run and Roll for Inclusiveness on Saturday, September 20, at Kids Together Playground at Marla Dorrel Park, 111 Thurston Drive in Cary.

Starting at 10:00 am, kids can play games and earn stickers to trade for prizes. Everyone can decorate their hats, shoes and wheels (wheelchairs, strollers and bikes) at the decorating station sponsored by the Cary Creative Center.  Winners will be chosen for Funniest Hat, Coolest Shoes and Snazziest Wheels. The walk begins at 11:00 am, with a send-off from KATAL the KT Dragon Mascot.

The 1.4-mile route follows the Hinshaw Greenway, across the pedestrian bridge to MacDonald Woods Park and back. Festivities continue until noon, with refreshments and raffles for nine great prizes, including a Maxi Scooter, birthday party packages and gift cards for local restaurants and attractions. A great way to spend a Saturday morning, registration is priced affordably: $5 per person or $15 per family.

Proceeds from the event will go toward the next new feature planned for Kids Together Playground, a Misting Garden. Online registration is open Register Online.