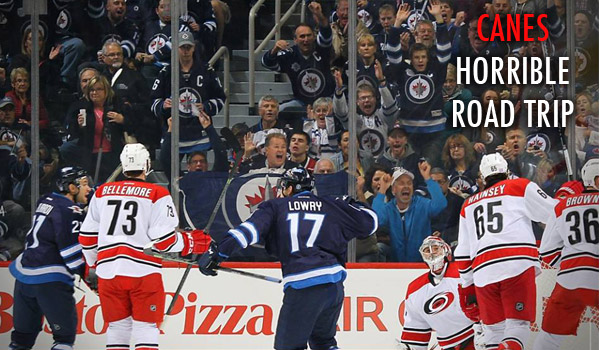 Raleigh, NC — The Carolina Hurricanes got off to their worst start in franchise history by not winning a game during the first month, going 0-6-2.

The team’s opportunity to have a great road trip–their longest of the season–was perfect. After playing against the Rangers in New York, the Canes headed to western Canada to play some of the weaker teams in the Western Conference with Vancouver being the exception as a strong team.

The Canes lost to the Rangers in a shoot out that went 8 rounds. The Canes played their best games of the young season against the Rangers, but like in the past few years, they had trouble putting the puck in the net. Both teams looked awful in the shoot out with Rich Nash, finally putting one in to end the game. The point the Canes earned would be their last for the month.

On to Western Canada

Next, the team was off to Winnipeg to play against the Jets. Former Cane and Winnipeg captain Andrew Ladd drew first blood, as it seems he always does against the Canes, early in the first. As the puck was sent to the net, Ladd crashed the net and won the battle in the dirty are right in front of the crease to slip one under Anton Khudobin. Late in the first, down 2-0, the Canes scored on a power play. With crisp passing between Alex Semin and Riley Nash that had the Jets defense scrambling, Nash finally took a shot. Jets goalie Ondrej Pavelec blocked the shot, but the rebound hit Tlusty, standing in the crease bouncing back into the net.

Watching the Calvary Stampede Would Have Been Better

The next stop was Calgary, playing against a team that is going through as much turmoil as the Canes. Not hiding the fact or sugar-coating it, the Canes played awfully and lost by only 5-0. The score could have been worse. It’s hard to find anything good about that game, and if everyone is going to have a bad game during the season, the entire team did for this one.

The Canes played Edmonton the next night, which should have been a good thing, so that the players could concentrate on the Oilers and not stew over the previous night’s performance. The start of the game was exciting, and the Canes first period showed more offense than the entire game against the Flames with 15 shots. Against the Oilers, they only had 16 for the entire game–and that 16 was a gift from the scorekeeper. The Canes kept up the pressure in the second with the score 2-2 after 2.

The third started out like the second with the teams exchanging goals early in the period. Either fatigue or the losing streak psyche came into play as the Canes began their defensive collapse again, finally losing 6-3 against a team that has been weak in the standings for years–but very strong on young talent.

Staal Returns to the Lineup

The final game was against a good Vancouver Canuck team. Eric Staal came off the Injured Reserve to play in only his third game of the season. Staal’s size, strength and skills were badly needed, as it was painful watching the Canes get pushed around on both offense and defense. Vancouver scored the first 3 goals and, while Cam Ward did play well overall, he was left out to dry on a couple of those goals. The book on the Canes in preseason was the defense needed beefing up, and all three goals were a testimony as to why that is still necessary.

The Canes lone goal was a good-looking goal with Jeff Skinner passing to Staal along the half boards who sent a centering pass to Tlusty, charging the net right, to his tape for a tap-in. Skinner was on the top line after Coach Bill Peters sat Semin. Look for Semin to be joining me in the press box at the next game, as his play has been not at all close to his talent level.

October is behind the Canes and they only have to look forward. Leadership is a word overused in sports, as all are professionals, but, we have to remember–all are mostly young men. Everyone has to step up their game, and they will.

Then again, they say Connor McDavid, projected to be the #1 draft pick, is the next super star. He’s on a tear this season averaging nearly 3 points a game, and he recently had a puck literally explode into fragments after hitting the post. I understand there’s a realty company in Cary already sending McDavid housing information. I’ll see about an exclusive interview as soon as I can.

Story by Bob Fennel. Photo from Winnipeg Jets on Facebook.

Deer Vs. Auto: By the Numbers
Scroll to top